In 2005, Matawan enacted the ‘Local Historian Enabling Act.’ Prior to this, the Matawan Historical Society had an “unofficial historian,” Stockton Hopkins. He did not want to pursue an official title, so in April of 2005, the MHS officers voted to ask the Historic Sites Commission to nominate Julius Kish for Town Historian. Official Matawan Borough records list the following individuals who have filled this position:

Individuals over the years have written books or other accounts which aid readers and researchers in understanding the growth and history of the area that now comprises Matawan Borough and what was once known as Matawan Township. These individuals are: 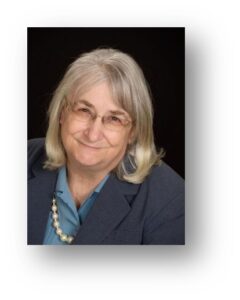 Anyone who has patronized a Barnes & Noble bookstore anywhere in the country over the years has seen the series “Images of America” by Arcadia Publishing on the shelves. Data for these books is compiled by the best local historians who present a town’s history – in the case of Helen’s “Around Matawan and Aberdeen” people, places and events from the late 19th century to the 1960s. She later published “Matawan and Aberdeen – Of Town and Field” for the “Making of America” series that covers the area’s earliest history to the present.  Her earliest book, “From the Back Street to Main Street, the Methodist Community of Middletown Point” was published in 1994, with a sequel in 2015 – “From the Back Street to Main Street… And Beyond”, both chronicling the Society of Methodists of Middletown Point from its early beginnings with circuit rider preachers to the current congregation of the 21st century as the Matawan United Methodist Church in Aberdeen.

Helen is a past-president of the Matawan Historical Society and former director of the Burrowes Mansion Museum. She also assisted the registrar and gave tours of the facility. Her professional affiliations included the Battlefield Restoration and Archaeological Volunteer Organization, Mid-Atlantic Association of Museums, and the American Association for State and Local History. She has lectured and curated exhibits on New Jersey’s ceramics industry and produced several local history documentaries. A feature-story writer and correspondent, her bylines include over three-hundred articles on varied topics including American and military history, antiques and collectibles, and air shows to bicycling the Mid-Atlantic area.

Hornor was named for his grandfather, the captain of the steamship Monmouth, a packet that regularly sailed from Middletown Point to New York City. His family, which included such old Monmouth County names as Bowne, Provost, Reid and Stillwell, had lived in and near what is now Matawan for generations. A lawyer by trade, he eventually transitioned to genealogist after his father died and he, a bachelor, moved home and resided with his mother.

Around February of 1930, Hornor commenced a series of articles entitled “This Old Monmouth of Ours” in the Freehold Transcript which spoke of people and events in the area. He compiled these in a publication of the same title in 1932, which is often used as a primary source for current researchers (note: Hornor often relied on others’ oral histories as his primary source, and the considerable amount of documentation now digitized was not available to him. I have noted on at least one occasion where something reported to him and placed in his book was at odds with official records.) His work was extensively cited in government and genealogical publications.

In 1936, most likely depressed about his mother’s recent death and his own ill health, he committed suicide. The Matawan Journal, after his death, published a series of his articles daily for weeks leading up to its 106-page September 10, 1936 edition celebrating the borough’s 250th anniversary. His papers are in possession of the Monmouth County Historical Association in Freehold, and he is buried in Matawan’s Rose Hill Cemetery.

Al is a Monmouth County historian and author of the 2016 biography “Stanley Fisher: Shark Attack Hero of a Bygone Age” about the famous 1916 Matawan shark attack. He was a recipient of the Monmouth County 2019 Jane C. Clayton award for outstanding contributions to county history. A holder of an MA from Georgetown University, Al was the Matawan Town Historian for many years and is currently the Historian of Rose Hill Cemetery. 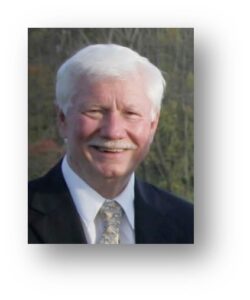 In 2011, he initiated a cemetery tour for the 19th century Rose Hill Cemetery, located off Ravine Drive near Middlesex Road. His narrative as he walked through the tombstones illustrated the lives of the memorable characters of our town. These tours were given twice a year until 2018. Al is now in the final phase of completing his upcoming book “Permanent Residents of Rose Hill Cemetery,” which will include the historic and paranormal aspects of this special site in Matawan.

In 2017, Al wrote a play entitled “Mayhem in Matawan” which was set in the 1920s during Prohibition. A crime wave had occurred in Matawan which included murder and kidnapping. He acted in the role of the narrator/historian, and around 30 characters in the play represented actual people at the time, all of whom he thoroughly researched. The actors were current citizens in 2017 including two mayors, councilmen and other prominent citizens. The play was performed in the summer at Lake Lefferts Park and the audience enjoyed watching their friends and neighbors as dramatic actors portraying an exciting chapter in the history of Matawan. He was also featured in the REELZ TV documentary movie “Shark Terror: The Real Jaws.”

Edward, now a resident of Pennsylvania, has had for many years an interest in local history, with a specific focus on Aberdeen Township. In 1996 he was appointed as Township Historian and served in that position for 20 years. 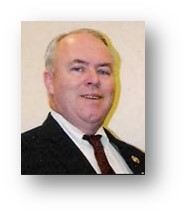 He was a contributor to Helen Henderson’s “Matawan and Aberdeen, Of Town and Field,” noted above, and wrote an essay on Aberdeen Township for the Office of the Monmouth County Clerk that appeared in their publication, “Town by Town, Impressions of Monmouth County.” Other contributions included a collaboration with the late George Joynson in researching the Van Pelt Family Burial Ground. This burial site was later surveyed using ground penetrating radar to locate potential unmarked burials.

Studying many local cemeteries in Aberdeen, Matawan and surrounding areas, he provided information to researcher Edward J. Raser, author of the Monmouth County Graveyard Locator (2002); much of this information appears in the 2009 addendum to that work. Using Aberdeen Township’s 1859 – 1903 Birth, Marriage and Death records, Edward compiled over 190 names of African American burials in the area; this has provided identification of many burials at the St. James A. M. E. Zion Churchyard, the Simmons-Little Burial Ground and other burial sites in Holmdel, Colts Neck and elsewhere. This manuscript has been deposited at the Monmouth County Historical Association.

His extensive property research, which covers all of Aberdeen Township, overlapping into Matawan Borough, Marlboro and surrounding communities, has been extremely useful to current researchers. He has documented many historic structures, both existing and demolished, in Aberdeen.

An Exempt Firefighter with the Aberdeen Township Hose and Chemical Company No. 1, he served as the company’s secretary for many years. He was an officer of the Aberdeen Township Firemen’s Relief Association from 1992 to 2017, most of that time as Treasurer, and as Vice President and Secretary. In 2018 he updated the Fire Company’s history for the company’s Centennial Celebration and has transcribed a compilation of newspaper articles covering fires occurring in the township from 1870 to 1923 – both may be found on the Fire Company website.

Edward’s extensive lists of residences and streets are important, constantly consulted material that make him the “go-to” guy on obscure items of local history. 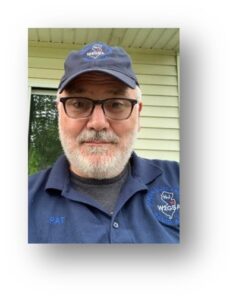 Individuals “Googling” aspects of local history are often directed to Pat’s “Aberdeen NJ Life” blog, wherein he has posted for over ten years      hundreds of historical research articles on local people and events. The detail is amazing – something that reflects his intelligence analyst background and master’s degree in that field (He received the FBI’s Director Award for his excellent work in the intelligence community.)

An avid genealogist, Pat has also inventoried historical collections including 18th century records belonging to Matawan’s First Presbyterian Church – he is currently addressing historical documents at the Museum located in the Burrowes Mansion.

Mary Lou Koegler Diecker (living) – author of “The Burrowes Mansion of Matawan, NJ and Notations of the History of Monmouth County”. This definitive work was published in 1978.  Recently digitized by the Matawan Aberdeen Public Library, the book documents the story of the Mansion and the interesting families who occupied it.  Exhaustively researched and written in an engaging style, it is filled with vivid details of life in early Matawan.

Gloria Bucco (living) – author of “Precious Cargo: A Collection of Stories from the Italian Immigrants of Matawan, New Jersey.” A collection of anecdotal recollections of local Matawan residents of Italian American heritage, this is an excellent account of the assimilation of that group into American society. (Note: see the Bucco reference in the “Matawan Surname Project” for additional information.) This book is available on Amazon.

Genevieve Van Brackle Donnell (1898-1974) – author of the booklet “Matawan Memories: Word Pictures,” a series of recollections of her childhood in the early 1900s. Genevieve was a remarkable woman, and more can be learned about her in the “Van Brackle” listing in the Matawan Surname section.

Alice Smith Tiemann (1895-1969) – author of “Township of Matawan:  1857-1957.” While a 1957 Matawan Journal article credits her husband Frank as being a co-author, the publication itself does not reflect this. This book, written along the lines of Henderson’s first work, commemorated the township’s 100th anniversary.

Dorothy Herbert Yeargin (living) – author of the two volume “Growing Up in Monmouth County – My Story Rich in Memories, 1936-1956.” Written with the intent of sharing her youthful experiences with her children and grandchildren, the book documents experiences on Church Street and Schenck Avenue in Matawan. Rich with heartfelt anecdotes and photographs, it presents an outstanding snapshot of life in town in the middle of the 20th century. Dorothy has made a digitized copy of the books available and it will soon be up on the MHS website.

Uncredited Authors – “Matawan 1686-1936” During the Great Depression, the Works Progress Administration (WPA) established the “Federal Writers’ Projects” in order to employ out of work authors and illustrators. 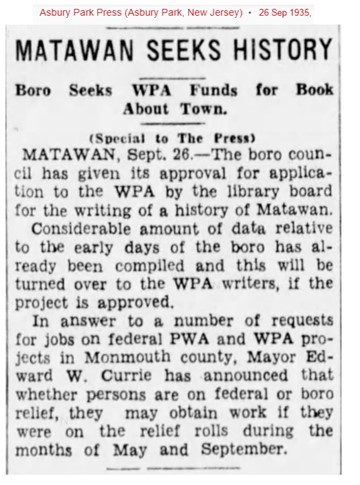