The Burrowes Mansion was built in 1723 by John Bowne III. It was first known as Bowne Manor. It is one of Monmouth County’s most important early Georgian buildings.

Bowne sold the home to wealthy grain merchant John “Corn King” Burrowes Sr. in 1769. It then became known as the Burrowes Mansion.

The house consists of two structures: the original house, and an addition that was once a separate house, later joined to the original structure. Recently restored, the house “retains a strong character of its colonial roots.”

The Burrowes family and the Mansion played key roles in local and state history during the Revolution. John Burrowes, Jr. organized the local militia and later served as a Captain, then Major, in the Continental Army.  In 1778, the Mansion was the site of a famous skirmish between local Patriots and Loyalist forces.

The Mansion has had many owners over its 300-year history.

The HISTORY OF THE MANSION 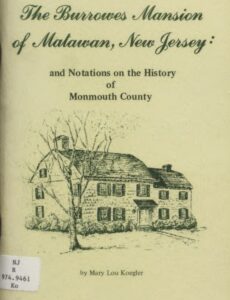 The definitive work on the history of the Burrowes Mansion was published in 1978 by Mary Lou Koegler (Diecker).  Recently digitized by the Matawan Aberdeen Public Library, the book tells the complete story of the Mansion and the very interesting familes who lived in it.  It is exhaustively researched and written in an engaging style, filled with vivid details of life in early Matawan.

A PDF version can be found the link below (provided by the Library):

The Burrowes Mansion of Matawan, New Jersey: and Notations in the History of Monmouth County

The book will be reprinted in late 2022, in its original form, under the auspices of the Matawan Historical Society.

The Burrowes Mansion Museum is a local history museum operated by the Matawan Historical Society. The museum contains period rooms, antiques — including eighteenth and nineteenth century furniture — and local memorabilia. Special mini-displays and exhibits highlighting a collection of historical events are on display from time to time.

The museum is open to the public on the first and third Sundays of the month from March through December from 2 pm to 4 pm. Special tours for groups or school classes are possible by making advance arrangements.