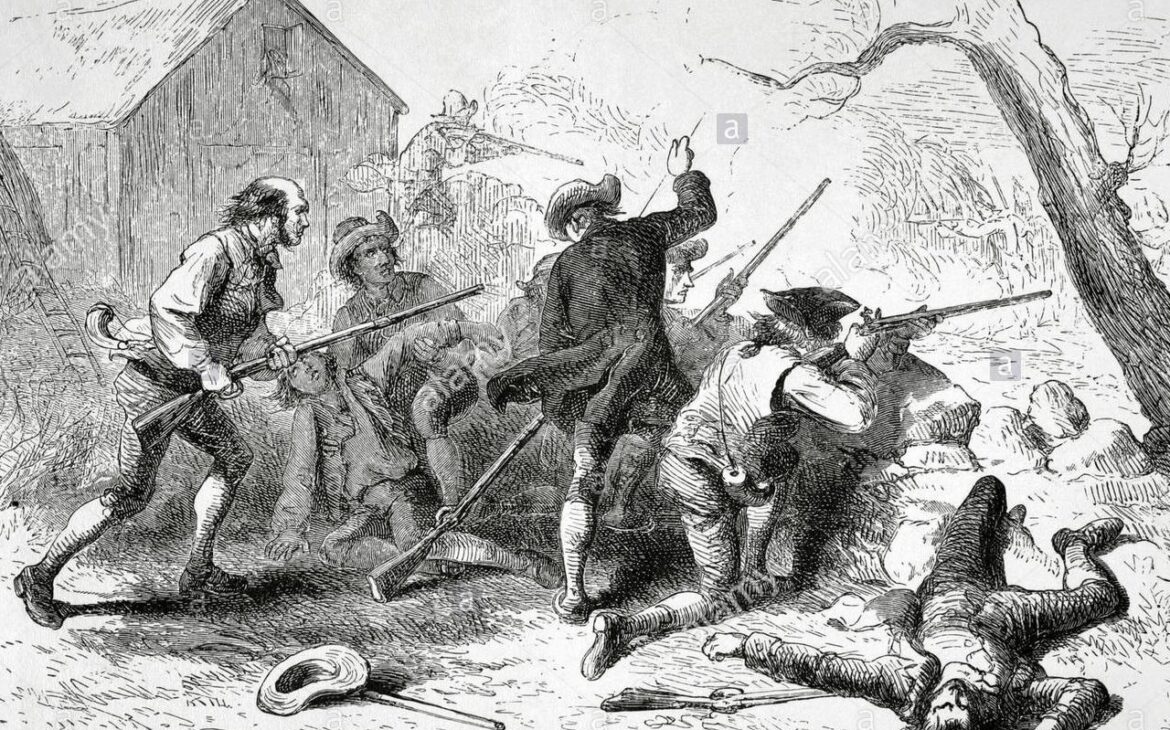 The Burrowes family were no friends of the Tories.  As a grain and produce merchant, John Burrowes, Sr., provided local Patriots with supplies.  His son, John Burrowes, Jr., was a Captain in the 1st NJ Regiment, and openly drilled local Militia volunteers in the front yard of the Mansion.  In addition, local Patriot raiders secured their whaleboats in the Burrowes millpond (at the current site of Lake Matawan); these boats were used to attack British ships in Raritan Bay.  A Tory response to these transgressions seemed inevitable.

On May 27, 1778, Loyalist forces of “Skinner’s Greens” (organized by Gen. Cortlandt Skinner) attacked Middletown Point (now Matawan).  Their objective was twofold: to burn the mills and warehouses owned by Burrowes (and those of his business partner, Samuel Forman); and to capture Capt. John Burrowes, Jr., long considered to be a “rankling thorn” in the side of the British.  The Tories knew—most likely through their spy network—that Burrowes, Jr., would be at home in the Mansion on this day, on leave from military duty.  The younger Burrowes had recently married the 19-year-old Margaret Forman, the daughter of Samuel Forman, and she had moved into the family home.  He would visit her, discreetly, whenever possible.

Around midnight, under the concealment of a new moon, a force of over 200 Greens left Sandy Hook by boat and landed at Conasconk Point (near present day Union Beach). They made their way to Matawan, travelling through Hazlet (then called Bethany) to the center of town.  Along the way, locals who saw the force were able to forewarn the Matawan militia, giving them a brief time to prepare. Fighting ensued, and there were casualties on both sides.  The Matawan forces were greatly outnumbered.

John Burrowes, Jr., had been warned of the attack.  He hastily exited through the rear of the mansion—reportedly losing a boot in his escape down the steep muddy embankment—and swam across Matawan Creek.  He was able to hide in the nearby woods, evading the Loyalists.

A small, fast-moving detachment of the Greens surrounded the Mansion, then burst through the front door. Upon entering, they were met by Capt. Burrowes’s wife, Margaret Forman Burrowes.  She confronted them on the stairwell, whereupon a Loyalist officer demanded that she give up her shawl to bandage one of his wounded soldiers.  In a famous act of defiance, Margaret is reported to have said “You’ll not get my shawl or anything else here to aid a British subject.” The officer struck her in the chest with the hilt of his sword, inflicting a wound that troubled her for the remaining ten years of her life.

The invaders searched the house for Burrowes, firing their muskets into the upper stairwell.  (Holes made by the musket balls are visible today.)  Outraged upon learning that he had escaped, they removed most of the furniture from the house and burned it, and unsuccessfully tried to burn down the house itself.

The Greens took John Burrowes, Sr., and several other Patriots as prisoners.  Burrowes was later released in exchange for William Taylor, a Tory prisoner taken by the Patriots who was thought to have planned the raid.

Unfortunately, the Greens were successful in burning down Burrowes’s and Forman’s mills and two large warehouses.  The Patriot partners never recovered financially from this devastation.