Matawan has been called home to several well-known personalities, some of whom were famous locally and others who were known beyond our town limits. 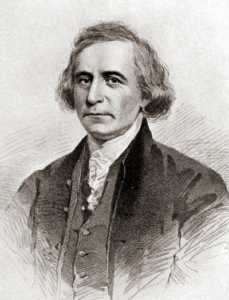 Philip Morin Freneau (January 2, 1752 – December 18, 1832) was an American poet, nationalist, polemicist, sea captain, and newspaper editor who was sometimes called the “Poet of the American Revolution”.1 Freneau was a student at Princeton University and, while there, began to seriously write poetry. Eventually, his writings took a more patriotic tone as the country moved closer to revolution.

Deep in a vale, a stranger now to arms,
Too poor to shine in courts, too proud to beg,
He, who once warred on Saratoga’s plains,
Sits musing o’er his scars, and wooden leg.
—from The American Soldier by Philip Freneau

The non-political works of Freneau are a combination of neoclassicism and romanticism. His poem “The House of Night” makes its mark as one of the first romantic poems written and published in America. The Gothic elements and dark imagery are later seen in the poetry by Edgar Allan Poe, who is well known for his gothic works of literature. Freneau’s nature poem, “The Wild Honey Suckle” (1786), is considered an early seed to the later Transcendentalist movement taken up by William Cullen Bryant, Ralph Waldo Emerson, and Henry David Thoreau.2

For a summary of important events in Freneau’s life, please see this Freneau Chronology.

The Burrowes Family (1769 – 1795) owned and lived in the historic Burrowes Mansion located at 94 Main Street. Although they were not the first family to live there – they bought the mansion and surrounding farmland in 1769 from the Bowne family who had built it – the Mansion is most strongly associated with the Burrowes family because of their ties to the Revolutionary War as patriots who fought to liberate the country from British rule. Most notable of the family were John “Corn King” Burrowes; his son Major John Burrowes, Jr.; and the Major’s wife, Margaret Burrowes, for their patriotic efforts. For more information about the Burrowes family, please visit the Burrowes Mansion page on this site or the Burrowes Mansion Museum website.

The Forman Family was another prominent family in early Matawan, and the lives of this family were intertwined with those of the Burrowes family.  Col. Samuel Forman (Nov. 13, 1714- Jan. 18, 1792) was a wealthy merchant and political radical, and was the business partner of John Burrowes, Sr.  Burrowes and Forman kept warehouses and granaries along the banks of Matawan Creek, which provided easy access for ships sailing to and from various ports of commerce.  The Forman family lived in the home now known as the Old Hospital.

Samuel’s father was Jonathan Forman (a judge) and his mother was Margaret Wyckoff.  His grandfather was Samuel Forman (the high sheriff of Monmouth County).  His cousin was General David Forman (“Black David”, or “Devil David”), whose New Jersey Militia joined forces with Washington.

Mr. Forman mentions that his father, Samuel Forman, did not escape a visit from the Tories
and British. At one time, they made a descent upon the village of Middletown Point. There
was a mill at this place, which was well known and much resorted to for a great distance;
and some of these Tory invaders had been employed in the erection of this mill, and were
personally well known to the citizens, and it would appear that their object was, at least, to
capture Samuel Forman, if not to kill him. They plundered the houses of the settlement,
destroying what they could not carry off, boasting that they had aided in building the mill,
and now assisted in kindling the fire in the bolting box to burn it down. They had surprised
the guard placed for the protection of the place, killing several of their number, who had
been their schoolmates in former years. Samuel Forman eluded their vigilance, but lost
heavily by this invasion, for he owned almost all of one side of Middletown Point, and part
of both sides of Main street. He never applied to Congress for any remuneration for his
losses. He died in 1792, in his seventy-eighth year. In this foray, the enemy burned two
store-houses of Mr. John H. Burrows, robbed his house, and took him prisoner to New
York. After several months, he was exchanged, and returned home.
—from the introduction to Major Samuel Forman Jr.’s Narrative of a Journey Down the Ohio and Mississippi in 1789-1790

W. Stanley Fisher (April 12, 1892 – July 12, 1916) was the 24-year-old owner of a dry cleaning and tailor shop in downtown Matawan when a shark attacked and killed 12-year-old Lester Stillwell in Matawan Creek on July 12, 1916. Mr. Fisher was attempting to recover Lester’s body when he was attacked by the shark as well, passing away at Long Branch Memorial Hospital from severe blood loss and shock a few hours after the attack. He is laid to rest in the Fisher family plot in Rosehill Cemetery in Matawan.

EXCERPTS FROM STANLEY FISHER: HERO OF A BYGONE AGE BY AL SAVOLAINE3

In 1916, at age 24, Stanley Fisher was a tall, handsome, engaging young man who was easily noticed in a group. He was very popular in Matawan to people of all ages. The young boys followed him around because they admired his strong build and athletic ability. Stanley was also an accomplished singer in the local Methodist Church choir. He was an officer in the YMCA organization and also enjoyed working with the town boy scout troop. He was always willing to give advice or a helping hand to young people who looked up to him as a role model.

Stanley was just starting a new business of dry cleaning and tailoring. The business was located in a building almost in the center of town. Stanley had also become the authorized resident dealer of the Royal Tailors, a men’s clothing company based in New York City and Chicago. Stanley had placed several impressive advertisements in the Matawan Journal, emphasizing how this new process would keep men’s clothing in much better condition. He was proud to be a part of this new, developing technology.

Stanley Fisher on July 12, 1916, would lose his life and become a folklore hero in New Jersey as a result of a violent shark attack. Stanley was trying to recover the body of an eleven-year-old boy, Lester Stillwell, who had fallen victim to a large shark at a muddy swimming hole along the banks of a tidal body of water known as Matawan Creek, which winds like a snake through the center of this small town. This incident, which was reported internationally at the time, is still remembered today and was an inspiration for a multitude of documentaries, books, television shows, and thrilling movies.

3. Reprinted with permission from the author