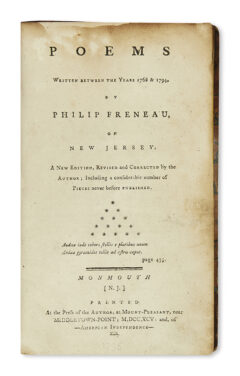 The Freneaus establish their Mount Pleasant estate near Middletown Point, a tract of over 1000 acres.

Enters Princeton as a sophomore; begins composing poetry.  Forms close friendship with classmates James Madison and Hugh Brackenridge.  With Brackenridge, wrote Father Bombo’s Pilgrimage to Mecca in Arabia, thought to be the first work of prose fiction in America.

Co-authors poem “The Rising Glory of America” with Brackenridge, foretelling the independence and expansion of America.  Brackenridge reads the poem at their commencement ceremony.  Also at the ceremony, Freneau delivers his prepared response to the topic, “Does ancient poetry excel the modern?”  He argues in favor of the ancient.

Takes a teaching job at a school in Long Island but quits after 13 days, finding the students and administration difficult and unpleasant.  He also decides against a career in the Church.  Moves to New York.

Goes to the West Indies (Santa Cruz), where he composes original and vivid poems including “The House of the Night.”

Serves as third mate of the Aurora, a privateer ship.  The Aurora is subsequently captured by a British ship and Freneau is taken prisoner.  He is incarcerated in the British prison ship Scorpion where is he is badly mistreated.  After six weeks, he was released and he returned to Mount Pleasant, destitute.  Later, he writes the poem “The British Prison Ship” documenting the cruelty of the British.

Moves to Philadelphia and becomes editor of The Freeman’s Journal.   Writes poems and essays that are circulated throughout the country.

Takes job as postal clerk in Philadelphia; continues to publish essays and poems.

Sails to the West Indies on the ship Dromelly, which is destroyed in a hurricane near Kingston, Jamaica.  Returns to Philadelphia.

As Captain of the sloop Monmouth (owned by his brother Peter), Philip returns to the Caribbean Islands.  Writes notable poems including “The Wild Honeysuckle.”

With James Madison’s support, Freneau accepts position as French translator in the U.S. State Department, working for Thomas Jefferson, then Secretary of State.  Freneau moves to Philadelphia and starts the National Gazette, a pro-Jefferson and anti-Federalist publication that promoted the ideas of Jefferson and Madison and attacked the positions of Federalist Alexander Hamilton.  The paper became one of the most widely read in the U.S. and damaged the Federalist cause.

The National Gazette is shut down by Freneau, primarily because of a yellow fever epidemic in Philadelphia.  Freneau returns to Mount Pleasant and tries to start his own press.  He experiments with printing almanacs for profit.

Starts a newspaper called The Jersey Chronicle.  Publishes criticism of the proposed (John Jay) treaty with England.  Publishes his well-known collection Poems Written Between the Years 1768 and 1794.

Starts a newspaper called The Time Piece and Literary Companion.

Freneau writes columns against the Alien and Sedition Acts, sometimes under the pseudonym Robert Slender, O.S.M. (One of the Swinish Multitude).

Returns to sea as the commander of the schooner John, owned by his brother Peter.  Their shipping business was a financial failure.

On October 18th, Freneau’s home at Mount Pleasant, built by his father in 1752, is destroyed by fire.  Many of his finest unpublished works were lost forever.  The Freneaus move to a smaller house nearby.

Because of money problems, Freneau and his family are forced to move to an abandoned farmhouse in Freehold owned by Denise Forman, Eleanor’s brother.

While walking home in an early evening snowstorm after meeting with friends, Freneau apparently loses his way and freezes to death.   He is buried several days later next to his mother in the Locust Grove at Mount Pleasant.