The Old Hospital, which sits near the bank of Matawan Creek and Lake Lefferts, is one of the oldest homes in Matawan.  The exact date of its construction is unknown, but sources indicate that it was probably built between 1730 and 1755.  The house is located at the foot of the hill on Ravine Drive on the corner of Wyckoff Street.

During the Revolution, the house was occupied by the Samuel Forman family.  Forman was a wealthy merchant and political radical with a great dislike of the Tories.  His family was prominent in Monmouth County; Forman’s father was Jonathan, a judge, and his mother was Margaret Wyckoff.  His cousin was General David Forman, also known as “Black David,” whose New Jersey Militia joined forces with Washington.  Forman himself became a colonel in the Continental Army.

Samuel Forman’s business partner was Major John Burrowes Sr., who occupied what is now known as the Burrowes Mansion, a short distance away along the bank of the Creek.  Forman and Burrowes kept warehouses and granaries along the Creek, which provided easy access for ships sailing to and from various ports of commerce.  A Library of Congress map from 1781 shows “Forman’s” clearly labeled as an important point along the waterway.

Forman’s wife was Helena Denise, and together they had seven children in the home.  Like their father, Samuel’s three sons—Jonathan, Denise, and Samuel, Jr.—were all officers in the Continental Army.  Jonathan, born in the house in 1755, became a general and served with George Washington.  Denise fought at the Battle of Germantown and was taken prisoner with Capt. Philip Freneau and incarcerated in the British prison ship the Scorpion.   Major Samuel Forman Jr., the youngest, witnessed the evacuation of the British from New York in 1783 and wrote about it in his memoir.

Several of Forman’s four daughters also achieved notoriety.  Margaret married Major John Burrowes Jr. and was wounded in the infamous Loyalist raid on the Burrowes Mansion in 1778.  Eleanor Forman married Philip Freneau in the Old Hospital on April 15, 1790 and had four daughters with him.

On May 23, 1779, a skirmish between the American Militia and British troops occurred in the direct vicinity of the house near Ravine Drive. Local patriots forced British horsemen down the hill from the top of Main Street toward the banks of Matawan Creek.  (This stretch along Ravine Drive was then known as “Forman Hill.”)  A second group of Americans descended the hill from Maiden Lane toward the Creek to flank the British from the north.  After a bloody fight, some of the British escaped by swimming the Creek toward Raritan Bay.  The wounded soldiers from this clash were carried to the Forman home.  As a result, the house became known as “The Old Hospital.”

It was said that the number of dead was marked on the doors of the house, but no evidence of this remains today. 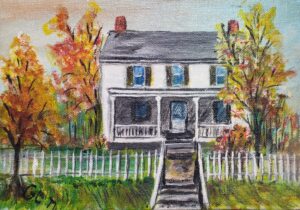