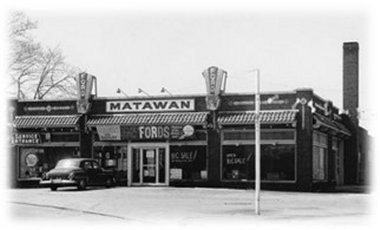 Born September 10, 1865 in New York City, George Lincoln Barrett relocated to Atlantic Highlands in the 1880s. On January 25, 1888, he married Jessie E. Morris (1884-1929) of that city, and they subsequently had four children, eldest son George Spencer Barrett being born in New York City, with the others born in Atlantic Highlands.  George’s obituary indicated he was one the first New York City businessmen to settle in Atlantic Highlands and “helped build up the town.” At the age of 15 he began work with the Equitable Life Assurance Company of New York City, and after 44 years of employment at that firm became the assistant registrar of the company. He was an early rail commuter from the Jersey Shore to the city. Retiring from the firm in 1924 due to poor health, he moved to Matawan in 1925 to assist his first son in the automobile business. On September 4, 1927, he died at his son’s residence at 157 Main Street, a home near the present-day post office that has since been demolished. 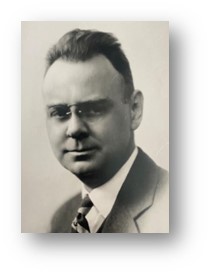 George Spencer was the only child of George Lincoln Barrett who eventually settled in Matawan, arriving here in the early 1920s (he started working in Matawan in 1918 but was living in Middletown per the 1920 census.) In 1910, he married his former high school teacher (he was 21 when they married, she was 25), Elizabeth English, in Englishtown, NJ. She gave birth to a daughter in 1912 – tragically both the mother and daughter died soon after the birth. George Spencer married again on October 4, 1913 to Agnes E. Chapman (1889-1996). They had one child, George Chapman Barrett in 1915.

George Spencer was a prominent and influential citizen of Matawan. He commenced working for William E Mount’s Ford dealership in 1918, which had opened in 1917, occupying a large portion of the Matawan Commercial Block. The company reportedly sold 273 cars in 1922. In January 1923 the firm was reorganized as the Mount-Barrett Company and Barrett was the firm’s general manager. The dealership sold Ford and Lincoln automobiles along with Fordson tractors. In 1926, George Linzmayer sold them property on Main Street, and they built a new showroom. The building now houses an abandoned liquor store next to the closed Quick Check.

In 1919, George Spencer purchased a lot on 4 Schenck Avenue and built the 2nd residence on the street, which had only opened in 1915. George’s son George Chapman was one of the first children raised in the neighborhood that would eventually become Edgemere Heights. (Fun fact: last year, Barrett Tree Service, owned by Jonathan Barrett, George Spencer’s great grandson, pruned a large tree in the rear of 4 Schenck, a tree that most likely was planted by his ancestor.)

In 1926, he was elected to fill a one-year, unexpired term on the Matawan Borough Council and was subsequently re-elected to consecutive three-year terms, serving to 1933. He was on every borough committee and was council president in 1932 and 1933, during a huge expansion in Matawan which included the new lakes and several new developments around town. An editorial in the Matawan Journal in 1934 characterized Barrett as “an honest, courageous and conservative borough father”. He donated parcels of land to Matawan that made up a sizable portion of Terhune Park.

Barrett was elected and served as vice president to the Matawan Township Board of Education between 1954 and 1957, He served on the Matawan Borough Civil Defense Council during WWII and was Chairman of the Matawan Planning Board. He served two terms as President of the Monmouth County Automobile Dealer Association, and later headed the new Barrett & Son Ford dealership after Mount left the business.

George Spencer Barrett died December 5, 1960 in Matawan and is buried in Fairview Cemetery in Middletown. His son George Chapman Barrett married Jean Stryker June 4, 1938 in Red Bank and the couple subsequently had five children. George continued his father’s business in Matawan until 1959 when he sold the company. He died in North Carolina in August of 2009. 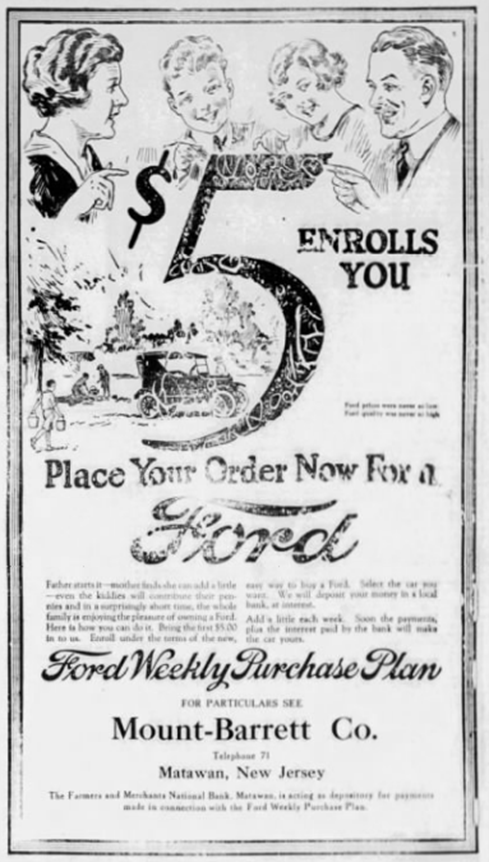