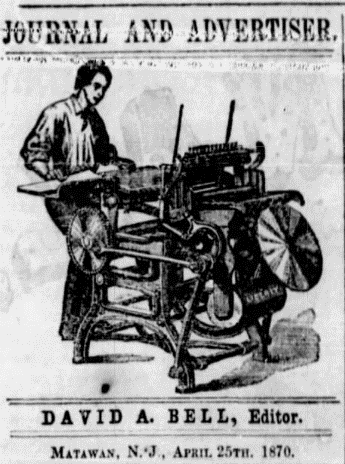 George was born February 23, 1814 in Liverpool, England and as a small child came to the United States, initially settling in New Brunswick, NJ. Around 1835, he came to Matawan and entered into the marble monument business, buying out Isaac Hill’s established operation. In 1850, he opened a drug store which was located around 114 Main Street, across the street from Farry’s Hotel (also known as the Matawan House), near the junction of Main Street and Maiden Lane. 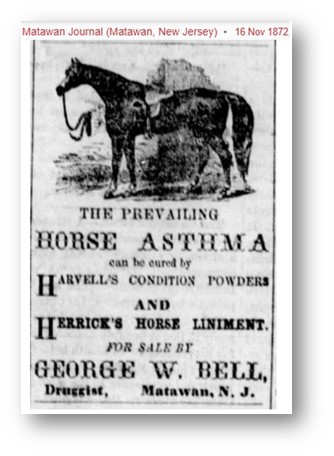 Bell served as Matawan’s Postmaster in 1850. Around that time, according to his obituary, he associated with Charles W. Fountain in publishing the Democratic Banner, eventually selling this paper to George C. Waitt. (Another account indicates that Waitt founded the paper in 1848, selling it to Bell and Fountain in the spring of 1851. The two then supposedly sold the Banner to Henry Morford a year later. Morford soon after changed the paper’s name to the New Jersey Standard. Issues of this paper from 1852 to 1869 are digitally available. I believe the latter account to be accurate.) In 1874, Bell was authorized to receive subscriptions for the Freehold Monmouth Inquirer.

George married the former Laura M. Harris On December 28, 1838 in Monmouth County, and the two subsequently had five children.

Bell was active in Democratic politics, and in 1865 he was chosen as a delegate to attend the State Convention to nominate the Governor for the party. In 1875, New York Governor Tilden appointed him to act as a Commissioner for the State of New York, responsible for deeds and other legal instruments. He also acted as the Superintendent of Schools when Matawan was included in Middletown Township.

His obituary stated that he was known for his honesty and integrity and was often chosen as executor for estates of the citizens of Matawan, which was observed in numerous newspaper accounts by this writer.

Bell left the monument business in 1868, and left his drugstore around 1888, the year of his wife’s death. He passed away at his daughter’s in Bridgeport, CT on August 12, 1897. He and his wife are buried in the Rose Hill Cemetery, Matawan, NJ.

David was the second son of George and Laura, born in Matawan on March 10, 1841. 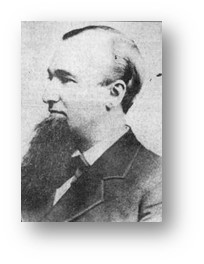 He attended the Glenwood Institute in Matawan and finished his studies at the Pennington Seminary, a Methodist college preparatory school founded in 1836 in western New Jersey. Upon completion of his studies, he studied medicine under noted Matawan physician Dr. Judson G. Shackleton (1836-1883), whose office was located where the present Bedle Funeral Home now stands on Main Street. When Shackleton deployed with the 29th NJ Volunteer Infantry during the Civil War, David continued studying with Dr. Alfred B. Dayton (1812-1870). He attended medical lectures at Columbia in New York City for about a year, then became severely ill and discontinued his study of medicine. 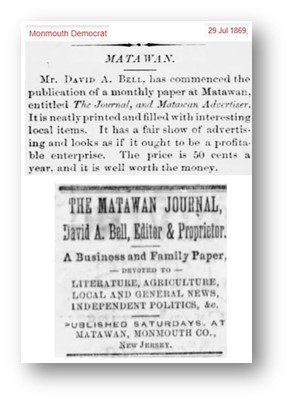 In the late 1860s, he worked as a representative for Globe Life Insurance in Matawan. Bell enjoyed writing and in 1869 was the president of the local Literary Society. That year, he established the Matawan Journal, following his father’s interest in the newspaper industry. He published the paper until 1890 when he sold it and purchased the Red Bank New Jersey Standard which he edited and published for two years. Bell appeared to support the interests of the Democratic Party, particularly that of fellow Matawan resident New Jersey Governor Joseph Bedle. In his day, newspapers were the primary means of influencing the general population – whoever owned the papers controlled the information that the public consumed. Some papers weren’t subtle in their leanings (The Tallahassee Democrat, the Belvidere Daily Republican, etc.) Citizens would purchase them for their news of day to day happenings in the community, local advertisements, sports, national events, and the slick, well-written op-eds would be available for their perusal. Few positive reports would be published regarding individuals at odds with the owner’s views or interest. Bell had served as private secretary for individuals who eventually became New Jersey Democratic governors, George Ludlow (1881-1884) and Leon Abbett (1884-1887). His obituary stated, however, that although he took a prominent part in Democratic county politics, “when the candidates of his party were considered by him not worthy of endorsement he did not hesitate to come out against them with all the force he possessed he strove to encompass their defeat.” It also listed his close association with Republican US Senator William Joyce Sewell, a Republican, as an example of his ability to cross party lines (Note: Sewell was quite the individual – an Irish immigrant who rose through the ranks and commanded units at Chancellorsville and Gettysburg, where he was severely wounded. He was the only commander of a New Jersey regiment in the Civil War to be awarded the Medal of Honor.) If Bell were indeed able to manage a politically neutral editorial page, that would be quite a remarkable feat. A lengthy study of his paper’s op-eds addressing items of interest over a period of decades is the only way to confirm this, and that’s outside the scope of this short life synopsis.

Bell was licensed to preach and did so at the Matawan Methodist Episcopal Church and also served as superintendent of their Sunday School.

In October 1867, Bell married Isabella Shepard (1847-1932) of Easton, Md. They had five children, only one of whom survived to adulthood. He died in Philadelphia on September 29, 1896 and is buried with his family in the Rose Hill Cemetery in Matawan.

Frank was the youngest of five children of George and Laura Bell. Born June 12, 1855 in Matawan he was educated at the Glenwood Institute like his older brother, David. He appears to have taken over the marble monument and drugstore business from his father. (His 1919 obituary states that Frank’s business was “where Sandford’s Pharmacy now stands”, and a 1914 map shows a drug store at what is now 114 Main Street.)

In 1876, Frank received an appointment as Notary Public from Governor Bedle. He and brother David ran a real estate and insurance agency out of the Matawan Journal office in 1877. 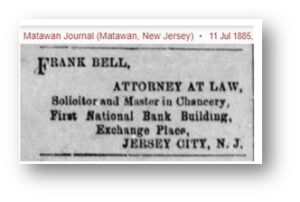 Frank studied law and in November of 1877 passed his examination and was admitted to the New Jersey Bar. The real estate and insurance firm David A. Bell & Company was changed to Frank Bell & Co, with the office in “the room of the old hotel building next to F. Schock’s Cigar Store”, per an article in the Journal April 13, 1878. In October of 1878, Frank established an office in the McKinney Building in Keyport. He subsequently practiced in Jersey City and eventually established an office in the Equitable Building in New York City.

Bell promoted the Monmouth and Middlesex Electric Light, Heat and Power Company and bought out the horsecar line that ran between Matawan Station and Keyport, converting it into an electric tram system. He sold both projects before they were completed. Financial backers in Jersey City bought a major hotel in Atlanta, Ga, which Frank managed. It failed, and he returned to New York City to practice law.

He was married twice, initially to Della Cole (1859-1888) in 1886, and they had two children. Della died the day after the birth of her second child, and Frank subsequently married Minnie Locke (1861-1938) in New York City in August of 1891 and she, too, bore him two children. Frank died suddenly at a hotel in Atlantic City on November 10, 1919. He is buried in the Cypress Hills Cemetery, Brooklyn, NY.