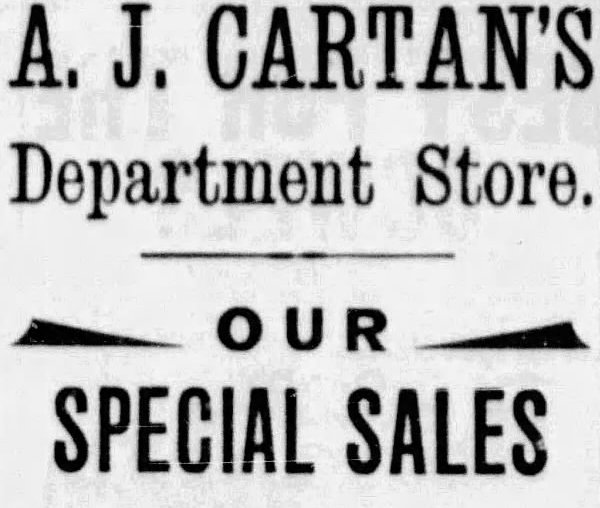 Lawrence Cartan (1832-1903) was born in County Wexford, Ireland and came to the United States around 1852. After a short stay in New York City, he moved to Englishtown and went to work at grist mills initially for Gilbert Mount and then at Keeler’s in that town. He would visit neighboring towns for his employers in a wagon and in 1857 sought out the services of Matawan attorney Henry S. Little in collecting a debt for his employer. Little was so impressed with Lawrence that he recommended that he relocate to Matawan and take over David S. Wycoff’s sawmill, which he did in 1860, establishing the firm of Cartan & CO, whose members included Little, Dr. Alfred Dayton and Gordon White, a local entrepreneur.

Large pine and oak trees originating from the Delaware River area were brought up Matawan Creek on rafts to the sawmill and were used for shipbuilding and home construction – many of the mid to late 19th century homes in Matawan were built using lumber from Cartan & Co. The business expanded to the sale of coal, then the primary source of home heating. The office and yard expanded and eventually occupied a large portion of Mill Street behind the Episcopal Church. 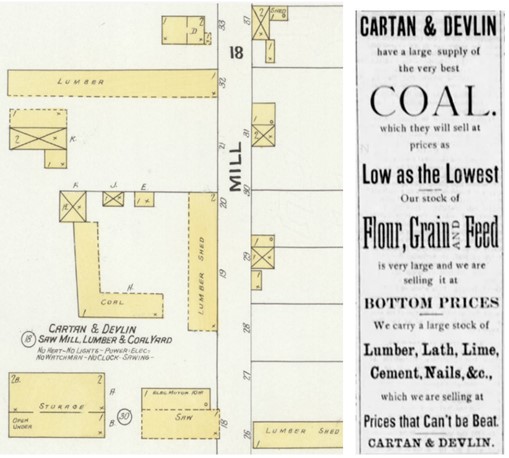 In 1889, Lawrence and his bookkeeper, Patrick J Devlin, who had been with the firm since 1880, created the Cartan & Devlin Co. (a separate Devlin Family history will be included in this surname project.)

Lawrence, a Democrat, was active in Matawan in local politics, serving on the Township Committee and Borough and Fire Commissions. His obituary stated he “broadened” his political view later in life and wouldn’t hesitate to back another party’s candidate if the individual was more qualified. This support was extended to his nephew James Cartan who ran for office as a Republican.

Lawrence married the former Ellen Cottrell around 1863 and they subsequently had nine children, six of whom lived into adulthood. Eight-year-old daughter Alice died on March 21, 1872 and younger sister Ella died two days later. While their short death notice didn’t name the cause of death, infectious diseases like typhoid fever of diphtheria would often ravage families in the 19th century. Ellen died suddenly in January of 1888, with Lawrence passing away on New Year’s Eve in 1903. Their family is buried in Rose Hill Cemetery in Matawan.

Andrew Johnson Cartan (1865-1927) was the eldest son of Lawrence and had an early interest in telegraphy. He started his employment with the New York & Long Branch Railroad and later with Western Union in New York City. In 1887 he established a general store in Matawan and the telegraph office he maintained in the business was Matawan’s primary source of that service, which lasted until telephones became common in town.

Andrew was active with the Matawan Township School finance commission and was reported to be one of the largest single shareholders of Matawan’s Farmers and Merchants National Bank and was one of its directors. He married Sarah Cuttrell in 1892 and they had four children. Andrew died on February 22, 1927 and is buried in Rose Hill Cemetery.

Lawrence Rensselaer “Rens” J. Cartan (1873-1942) The second son of Lawrence, Rens was involved with the Cartan & Devlin concern and like his brother Andrew, was a Director of the Farmers and Merchants Bank. He was active in the Elks and Odd Fellows societies and was the snare drummer for the Matawan Concert Band. He married Edna Bedle from Keyport in 1892, and they had two sons. Rens had a heart attack while driving his car in Rahway on November 15, 1942 and died there that day. He is buried with his wife in the Cedarville Cemetery in Hazlet. 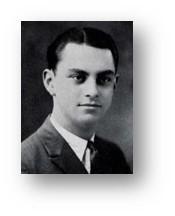 Rensselaer Lawrence Cartan Jr (1902-1985) was the son of Ren, Sr, above. Rens Jr, whose alternate nickname was “Renny,” played a role in the infamous shark attack on Matawan Creek in 1916 as one of the first to discover the presence of the shark.

The following is from Rogue Shark! The Jersey Shore Attacks of 1916:

On the afternoon of July 11th, 14-year-old Rensselaer Cartan was splashing in the creek with his friends when something big with skin as rough as sandpaper brushed by him. He screamed and scrambled out of the water onto the dock. His chest was scratched and bloodied. None of the other boys with him saw anything and many went back into the creek after Cartan left to get his wounds bandaged.  (http://www.unmuseum.org/rogue_shark_1.htm)

Unfortunately, this incident was not taken seriously, and the next day, Lester Stillwell and Stanley Fisher were attacked and killed by the shark.

Rens Jr managed Cartan & Devlin Co. until he retired in 1965. He was active in community affairs, including the Washington Engine Co., the Matawan First Aid Squad, the Rotary Club, the Matawan Masonic Lodge for 60 years, as well as the Elks Club and the United States Navy League. He was a member of both the Matawan and Keyport Historical Societies.

Johnson Cartan (1901-1989) was the son of Andrew Johnson, above.  On July 12, 1916, he was one of the boys present at the shark attack on Matawan Creek.  (As described above, Johnson’s cousin Renny was involved in a brush with the shark on the previous day.)  Johnson was a friend of Stanley Fisher, the boy killed on that day, and was swimming with him at the time.  The following is from the Keyport Weekly of July 14, 1916: 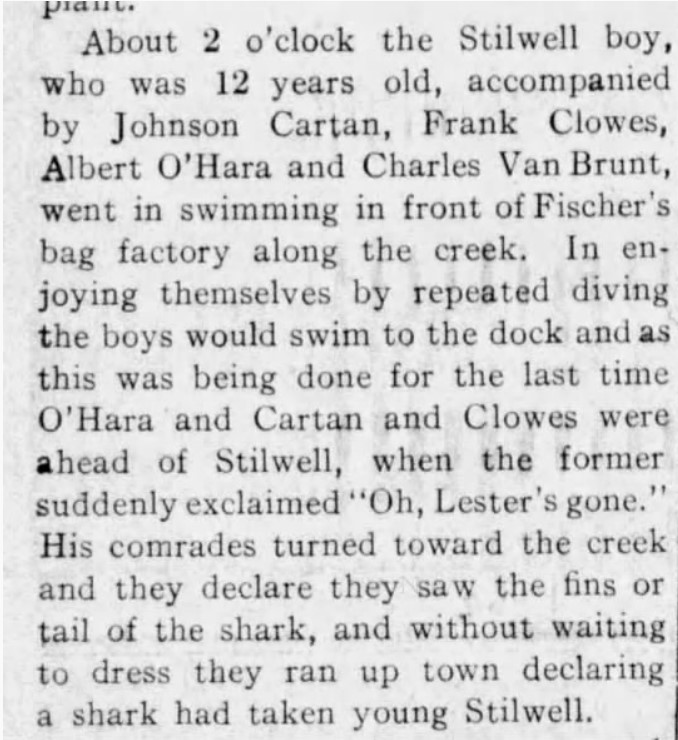 Upon his father’s passing in 1927, Johnson took over management of the family’s Matawan department store, A.J. Cartan’s.  In 1930, the store moved from its original location at 92 Main Street to the center of town at 121 Main Street.  It was a very popular store and was known for its elaborate Christmas decorations.