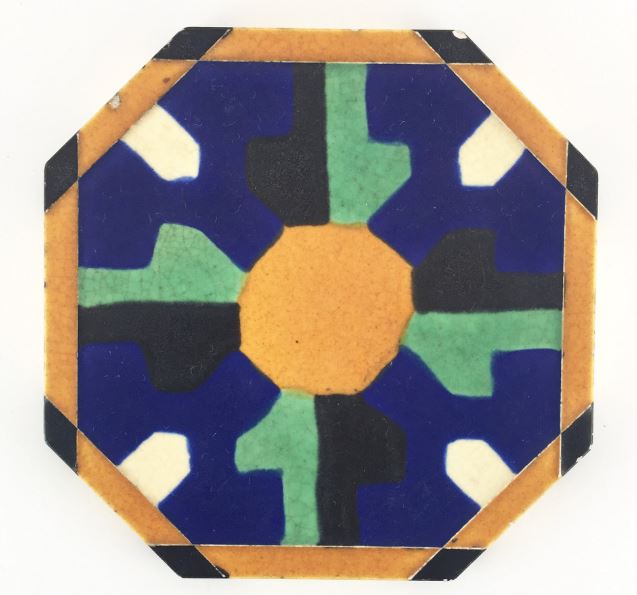 Immigrants over the years have made impacts on the character and growth of Matawan – the Dutch, Scotch, English, German, Italians all made their mark at one time or another in the borough’s history. One of the largest influences was that of the family of Bennet Knudsen Eskesen (1834-1897), a Danish sea captain who with his wife Kristine Baun (1840-1912) and their family of twelve (12) children, emigrated to the United States in batches between the early 1880s and 1891. Their contribution to the community centered on the business established by family members that eventually became the Matawan Tile Company, whose story is outlined in the ‘Matawan Businesses’ section of this site. 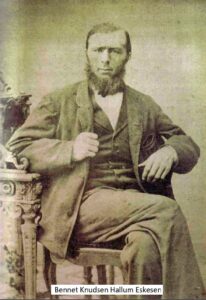 Bennet Knudsen Eskesen (1834-1897), family patriarch. Bennet, his wife and five youngest daughters arrived in New York on October 5, 1891 aboard the SS City of Rome. His older children arrived before at various times. He had previously visited the US in 1857. Upon arriving, he lived with his sons in Perth Amboy. In 1892, he was diagnosed with cancer of the throat and subsequently moved to Main Street, Matawan where he died on October 5, 1897. His last few years appear to have been very trying – he needed a tube to breathe and could only speak in whispers. He is buried in the Alpine Cemetery in Perth Amboy, as are many family members. After his death, wife Kristine moved back to Perth Amboy, where she died in 1912. 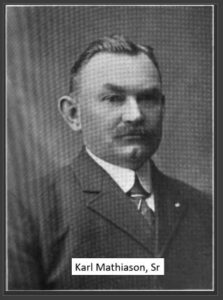 Daughter Metthea Karoline Eskesen (1863-1942) married Karl Wilhelm Mathiason (1860-1920). Bennet’s son-and-law Karl appears to have been the catalyst for the family’s involvement in initially terra cotta and then ceramic tile.

Karl and his parents came to the United States in 1873, with the intent of moving to the western states. Financial circumstances kept the family in Perth Amboy, however, where Karl learned the pottery and terra cotta trade. He married Metthea at his parent’s home in Perth Amboy on December 6, 1885, and with little money but much ambition established a small terra cotta factory in Perth Amboy with an Eskesen brother-in-law. Their efforts gradually paid off, and in 1897 they established the Matawan Terra Cotta Company. The board of directors consisted of himself as chairman, and brothers-in-law Eckardt Eskesen, Bennet Eskesen, Jr, Thoge Eskesen, Laurids Eskesen along with Peter Sondergaard, who was married to Bennet’s daughter Marie Eskesen. Karl was the company’s president, Laurids was vice president and Eckardt was secretary/treasurer. The factory would be on the site previously occupied by the J.L. Rue Pottery Company, which had closed two years before. The company would eventually be incorporated as The Matawan Tile Company.

Karl and Metthea had eight children. At the time of his death in 1920, he was also president of his original New Jersey Terra Cotta Company in Perth Amboy and the Director of the Royal Copenhagen Porcelain Company of New York. He was also a member of the yacht clubs in Copenhagen, Keyport and Perth Amboy. In 1910, he was decorated by the King of Denmark with the Order of Knights of Dannebrog, an honor bestowed to Danes who have excelled in civic or military duty.

Christian Peter Eskesen (1867-1903) married Christiane Larsen (1873-1951) in Perth Amboy in 1891. He had arrived the year before on the SS Russia. He lived in Matawan for three year prior to his death at 36 years of age and was involved in the family Perth Amboy terra cotta business. The couple had two children.

Eckardt Viarde Eskesen (1868-1943) married Mathilda Mathissin (1872-1898) on May 23, 1894 in Perth Amboy. His wife died at 26, leaving him with one daughter. He, too, started in the terra cotta business in Perth Amboy, and resided there while working in the industry. Eckardt was secretary and treasurer of Matawan Tile. A past president of the National Terra Cotta Society, he also was a trustee and president of the American Ceramic Society and was active in the American Scandinavian Foundation. A published author on terra cotta, he, like his brother-in-law Karl, received the Order of Knights of Dannebrog from the King of Denmark.

In 1921, he, along with ten others involved with the National Terra Cotta Association, including his brother-in-law Karl, plead guilty to violating the Sherman Anti-trust Act. The government wanted prison sentences, but it appears neither served time. He died in New York City in 1943.

Laurids “Lawrence” Bøjenhard Eskesen (1872-1914) was the vice president of the New Jersey Terra Cotta Company as well as being the VP of Matawan Tile. He also served as president of the Royal Copenhagen Porcelain firm in New York. After residing in Matawan with his mother and siblings in 1900 he returned to Denmark in 1902 and married Asta Schmidt (1881-1976), and the couple subsequently had four children, eldest son Aslag being born in Matawan in 1903. Nine months after his fourth child, Bennet, was born, Laurids died after an unsuccessful surgery to address a tumor in his brain. 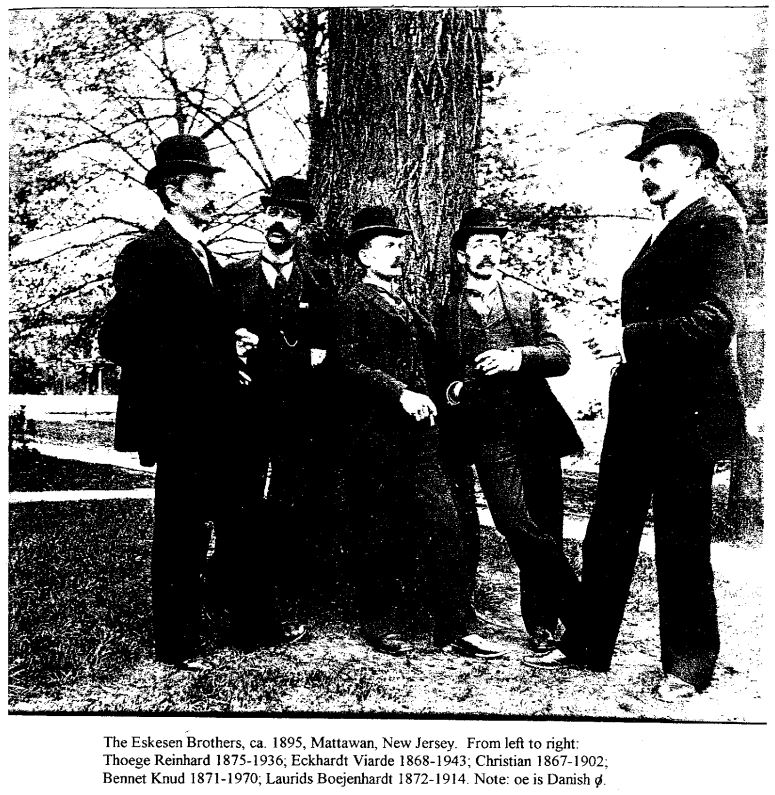 A complete Descendant Chart of Bennet Eskesen listing over 240 individuals can be viewed here: Descendants of Bennet Knudsen Hallum Eskesen

Below: Photo of the Eskesen home in Matawan located at 98 Main Street, occupied by the family of Bennet Eskesen, Jr, for most of the first half of the 20th century. It was torn down sometime after 1940. The Matawan Gulf Station started operating on the site in 1958. 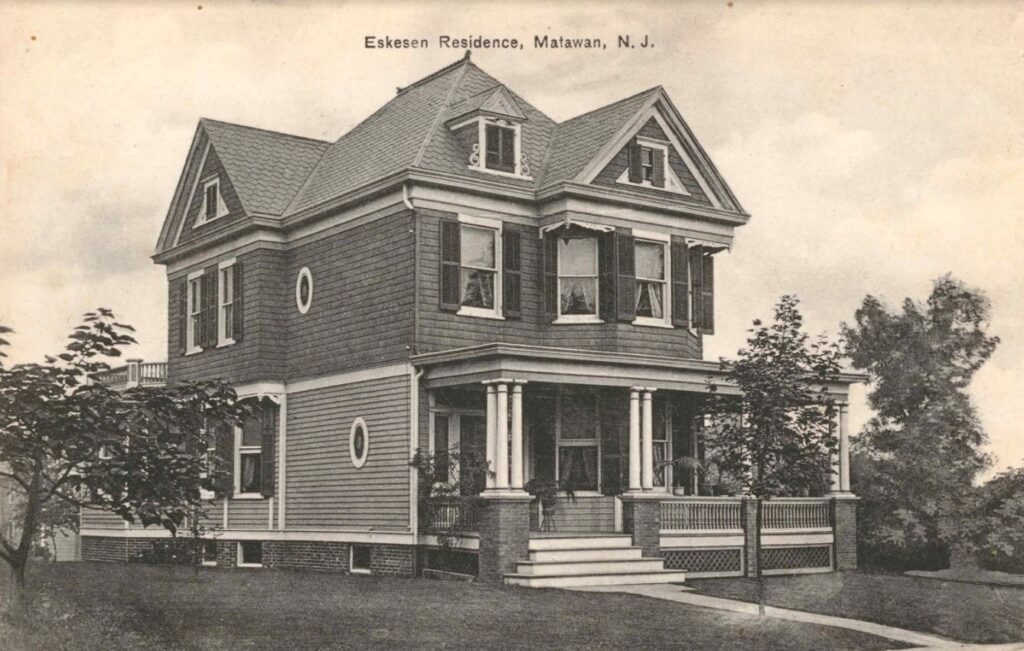