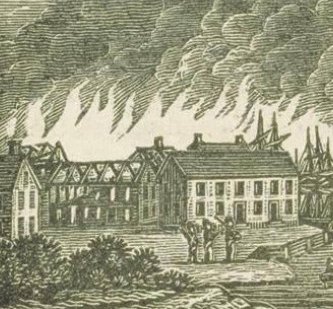 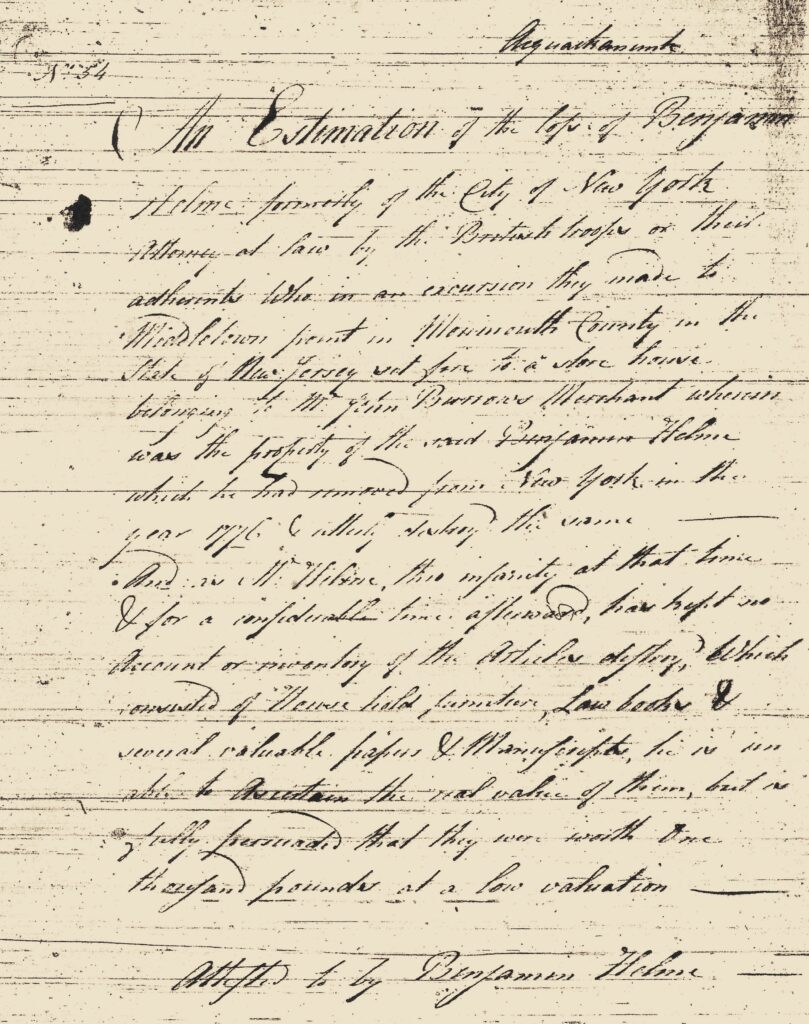 This document is taken from the New Jersey State Archives.  It represents a damage claim filed by Benjamin Helme, a New York City Attorney, for the loss of property destroyed in a fire set by the British.  In this case, the building containing the property was in Middletown Point (Matawan), and owned by John Burrowes, Sr., a prominent merchant and famous figure in Matawan history.  With his business partner Samuel Forman, Burrowes owned numerous warehouses, mills, and other buildings along Matawan Creek, an important shipping route to Raritan Bay.

What was New Jersey’s Revolutionary War Damage Claim program?  In 1781, as part of an effort to gauge the economic losses caused by the war, the New Jersey legislature decided to solicit an inventory of wartime damages caused by both British and American forces.  As described on the state website, “While no payments were ever made on the claims, the documentation provides excellent evidence of destruction and losses resulting from military engagements, foraging of troops, and commandeering of goods.”  A searchable listing of these claims is available online.

Apparently Benjamin Helme had arranged with John Burrowes, Sr. to hold his possessions in a Middletown Point storehouse owned by Burrowes.  The property—”Household furniture, Law books & several valuable papers & Manuscripts”—was removed from New York in 1776.  Helme estimated its value as at least one thousand Pounds.

While the document image is not very legible, this appears to be the complete text:

An Estimation of the loss of Benjamin Helme formerly of the City of New York Attorney at law by the British troops or their adherents who in an excursion they made to Middletown Point in Monmouth County in the State of New Jersey set fire to a store house belonging to M. John Burrowes Merchant wherein was the property of the said Benjamin Helme which he had removed from New York in the year 1776 & [utterly] destroyed the same –
And as ill Helme, this infirmity at that time & for a considerable time afterward, has kept no account or inventory of the Articles destroyed, which consisted of Household furniture, Law books & several valuable papers & Manuscripts, he is unable to ascertain the real value of them, but is fully persuaded that they were worth One thousand pounds at a low valuation.

We can speculate that Helme removed his property from New York City in response to the British military occupation of the city in 1776.  According to one source, in 1774, Helme himself moved to Passaic (then known as Acquackanonk Landing) as a result of ill health.  We also know that Helme was associated with a committee in New York City whose purpose was to enforce a boycott of British goods.  Perhaps Helme had some business relationship with Burrowes, the well-connected merchant.  In any event, his property was probably moved from New York to Middletown Point via ship and ended up in Burrowes’s storehouse on Matawan Creek.

The burning of Burrowes’s storehouse most likely took place during the infamous raid on the Burrowes property on May 27, 1778.  According to William Hornor in This Old Monmouth of Ours, “While the futile chase for Mr. Burrowes [Major John Burrowes, Jr.] was on, the Greens [Skinner’s Greens, a local group of Loyalist volunteers] proceeded to burn the Mills (the ruins of which continued to smoke and reek for days), destroyed or burned two large warehouses, with their contents, and some lesser buildings, and did considerable damage to boats lying in Matawan Creek.”

In Passaic, Helme was apparently a Patriot of some stature.  After George Washington’s retreat across the Passaic River in 1776, part of the so-called “Great Retreat” from New York to Pennsylvania, Helme delivered a welcoming address to Washington at the local tavern, the Tap House.  The speech was witnessed by a crowd of enthusiastic local farmers who were said to raise Washington’s spirits.   Helme was admitted as an attorney with the New Jersey Supreme Court in 1778 and his name appears in numerous legal documents of the time.

The extent of John Burrowes’s business dealings is not well documented.  We know that he was a broker of local agricultural products (hence his “Corn King” nickname) and sold textiles and other goods from his store in Matawan.  But based on his arrangement with Benjamin Helme, the question arises: Was John Burrowes, Sr. America’s first self-storage entrepreneur?