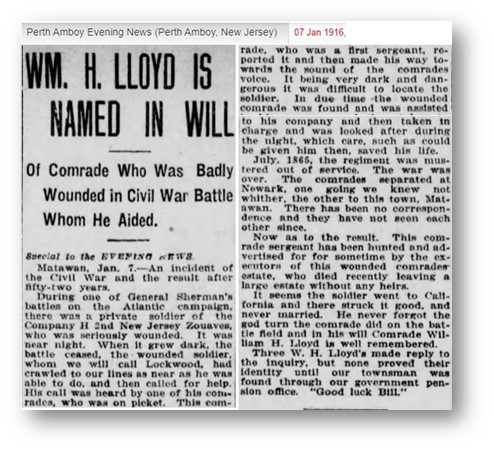 There is limited information regarding William Henry Lloyd’s early life. He is prominently featured in John Zinn’s The Mutinous Third Regiment: The Thirty-Third New Jersey in the Civil War. Zinn recovered over 40 letters from William to his wife Mary which are the most extensive surviving firsthand

account of the experiences of soldiers in the 33rd New Jersey Volunteers. They present a vivid picture of what it was like to travel and fight throughout the western theater from 1863 through the war’s end in April of 1865.

While researching the book, Zinn obtained William’s Civil War pension file, in which he provided a biographical statement in support of his pension.  While undated, it was received by the Pension Office in April of 1913. In it, William advises that he was born in Greenwich Village on May 19, 1842.  He then cites his father, brothers and sisters, all of whom are deceased as the source for the following – “My mother died when I was between the age of four and five years.  Then after my mother’s death my father ceased keeping house and I was sent to an acquaintance in New Jersey to board and go to school which I did for ten years.”  He also says he has no proof of his birth date other than what he was told by his family.  While not naming either parent, he advised that his father died “30 years ago” and was 83 at the time.” A search of the 1850 and 1860 New Jersey census records was unable to locate William.

Zinn was able to verify William’s service as follows:  “He enlisted in the 33rd New Jersey in August of 1863.  With that regiment, he served in the Chattanooga Campaign, the Atlanta Campaign, Sherman’s March to the Sea and the Savannah Campaign.  He was a Sergeant for much of that time and was promoted to Lieutenant at war’s end.”

William married Mary Eliza Lane (1842-1916) in 1863. Her obituary indicated that she was born in Hoboken, NJ but grew up in Manhattan. Their marriage occurred shortly before William enlisted, and after the war the family located to the Freneau section of Matawan. The 1880 census lists William’s occupation as “painter”, although later advertisements in the Matawan Journal described him as a Justice of the Peace and notary, with “pension claims a specialty.” According to author John Zinn, William’s record had numerous documents wherein he challenged decisions regarding his pension. 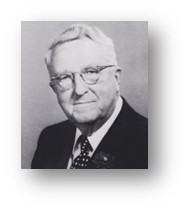 William’s second son Frank Howard Lloyd, Sr was born in the Freneau section of Matawan and attended Mount Pleasant Grammar School, Matawan High School, and subsequently matriculated to the Trenton Normal School (now the College of New Jersey). He was a teacher by profession, starting in Matawan in 1897 and in 1901 taught at the Perth Amboy High School, where he became principal in 1904 and was eventually district supervisor. He held that position until 1919, when he returned to Matawan High School as supervising principal. His obituary stated that during his teaching career, he had taught every grade from kindergarten to high school.

F. Howard Sr was a founder of what is now Monmouth University and was a member of its Board of Trustees for 24 years. He served as Director of the New Jersey Teachers Association and was active with the Red Cross and the Monmouth County Federation of Health agencies.

He was active in the area’s religious community, preaching at the Ardens Baptist Church for three years and was an accredited minister with the Colts Neck Reformed Church. He was a trustee of the Official Board of the Methodist Church and was the superintendent of their Sunday School.

F. Howard had many accomplishments as a town official, serving twice with the Matawan Borough Council and was vice president of the Matawan Board of Education. According to The History of Monmouth County, New Jersey 1864-1920, he ran unopposed in the elections for Borough Council, being the “candidate of both parties.”

In 1903, he organized the YMCA in Matawan and was its President. He was the Grand Master of the State of New Jersey Independent Order of the Odd Fellows and belonged to other fraternal organizations, including the local Masonic Lodge, the Order of United American Mechanics, the Men’s Club of Matawan and the New Jersey Schoolmaster’s Club. 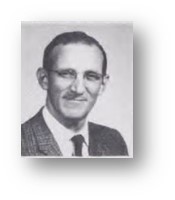 F. Howard was an educator like his father, who taught English at Matawan High School for a remarkable 62 years. His obituary referred to him as “beloved”, and from the many comments on social media regarding his enthusiasm and teaching style from his former students, this is an accurate characterization.

Graduating from Matawan High School in 1937, he enrolled at Rutgers University which he attended until March 12, 1942, at which time he enlisted in the army at Fort Dix. He was subsequently transferred to Camp Polk (now Fort Polk), LA on March 21, 1942.

Because of his education and age, Lloyd was commissioned as an officer, and served with the 175th Engineer Regiment. He saw service in North Africa, Sicily and the European mainland and was instrumental in providing support enabling US forces to remain on the offensive. 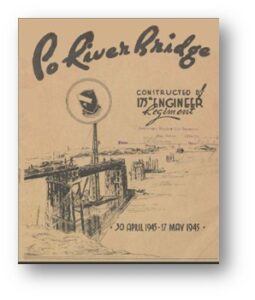 According to his obituary, his unit was instrumental in restoring drinking water to Rome after its liberation.  According to his family, the unit’s efforts in liberating La Lima, Italy was one of his most memorable war experiences

Upon the conclusion of the war, Lloyd embarked on a teaching career that would continue to his retirement in 2009. He married Ruth Elizabeth Dominick (1923-1973) in 1947 and they had three children, Elizabeth, Richard and Deborah. On his 100th birthday in 2019, he was presented the Key to the City by Matawan officials, and former students gathered outside his residence at 167 Main Street to sing him Happy Birthday. The stories of how he encouraged and inspired the thousands of students he taught over the years are many. He was truly the embodiment of the “Greatest Generation.” 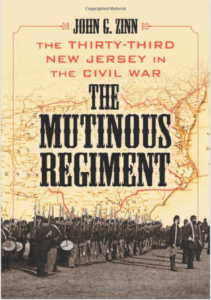