177 Main Street
The establishment of local brickyards, combined with increased local affluence, resulted in the construction of several fine brick residences in Matawan in the early 19th century. S. Potter, a lumber merchant from New York, built this Greek Revival house in the 1830’s of Flemish bond red brick with stone trim and a Greek-inspired frieze decorated with scroll-patterned grates and triglyphs. The house is locally known as Potter’s Folly after his unsuccessful attempt to establish a boarding school here. 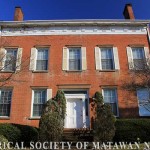 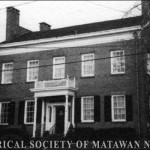