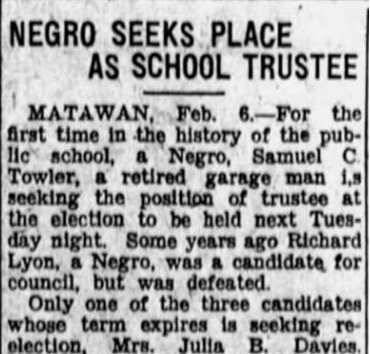 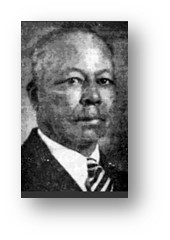 Samuel Comellious Towler was born March 20, 1872 in Boydton, Va. He was the third of fourteen (14) children of Sonny and Alice Towler – when his mother died, his father remarried, and they had an additional seventeen (17) children. Samuel had 30 siblings, and at least one brother subsequently moved to Matawan.

Samuel arrived in the borough around 1889 and found employment as a stable boy at the Aberdeen Hotel, working for William Close and William Winterton who operated the establishment’s livery stable. When Close and Winterton dissolved their partnership in 1905, Samuel became Close’s stable manager. He eventually bought out Close and became sole owner of the business, which was known as the Aberdeen Livery and Boarding Stables and continued to operate it for 47 years.

While working as a stable boy in 1895, an Irish immigrant family, the Gormelys, lived in a residence adjacent to the Aberdeen Hotel. Three-year-old John Gormely fell into a 12 foot well on the property and Samuel saved him from drowning. Four days later 8-year-old James Gormely fell from a tree on the property and severely fractured his leg. Samuel again assisted in getting the boy swift medical attention. His actions were well-regarded in the community. 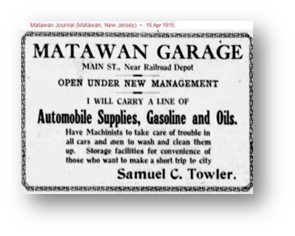 Samuel aggressively expanded his business interest in Matawan. His business was retained to drive a sprinkler wagon along the major streets of the city in 1916 to keep the dust down. In 1926 the Board of Chosen Freeholders appointed him to the position of Supervisor of the Keyport-Matawan county road.

In 1915 Samuel apparently converted his livery stable to the Matawan Garage and started augmenting his horse drawn conveyances with automobiles and trucks.

In 1931, Samuel became the first African American to run for a position on the Matawan Board of Education. Although he lost the election, he remained active in Republican Party politics and was elected as vice president of the Monmouth County United Colored Republican Club. In 1936, he was a guest speaker at Women’s Republican Club in Keyport, in which all the prominent Republican officials attended.

One of Samuel’s most significant achievements was his establishment of the Union Prospect Cemetery in Aberdeen. In early 1906, along with Wart Booker, the two obtained a 25-acre tract of land on Lloyd Road to subdivide into cemetery lots. Samuel had been attempting to purchase this property since 1898 from Jacob Van Pelt without success, but his persistence eventually paid off. 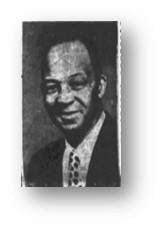 Clarence Augusta “Buck” Towler (1896-1992) was the only child of Samuel and Mary. He was appointed as a page boy in the New Jersey House of Assembly and over an 18-year period reached the post of the Assembly’s Sergeant at Arms. Five governors sanctioned his duties over his career serving the elected officials of the State of New Jersey. He was a life member of the Monmouth County Colored Republican Club and held the position of President in that organizations Matawan Chapter for 18 years. He also was a member of the Monmouth County Young Republicans and the South Jersey Republican League. He died in 1992 and is buried with his parents in the Union Prospect Cemetery. 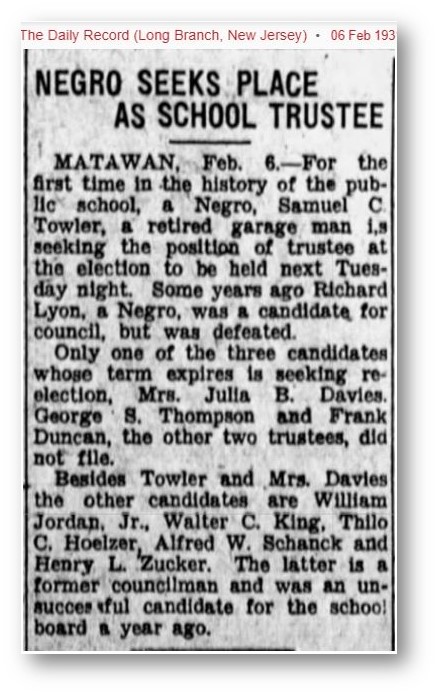