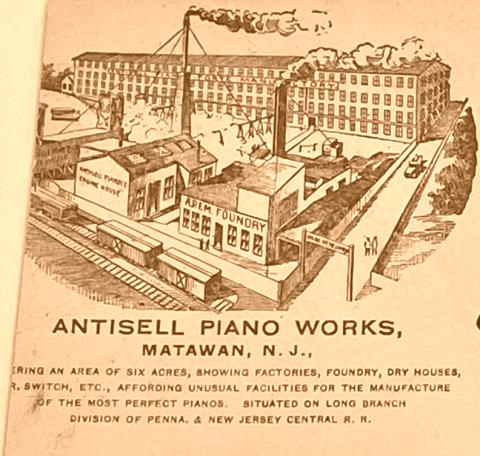 Thomas Murphy Antisell (1938-1917) emigrated to the United States from Ireland sometime before 1865. According to his obituary, Thomas was a mining engineer and after accumulating a modest fortune, moved to Oakland, CA, purchased several business properties, and engaged in the manufacturing of pianos. He married Philadelphian Sarah Comly (1847-1890) around 1868 and their first child Catherine was born in 1869 in that city. The family subsequently moved to Oakland, Ca and seven additional children were born: Thomas, Jr (1870), Alfred (1873), Frank (1875), Jessie (1877), Rose (1880), Daisy (1881) and Dora (1884). 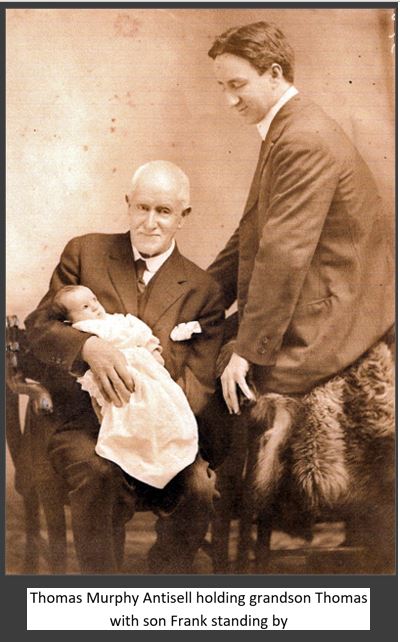 Published information reflects that the Antisell Piano Company was founded in California in 1865 (see the separate article for this firm under the “Matawan Businesses” section of this site.) In December of 1888, Thomas negotiated the acquisition of the vacant Window Shade Company building on Broad Street, and piano manufacturing at the site began in the late spring of 1890. In May of that year he initiated construction of an adjacent foundry to support his business.

In March of 1890, wife Sarah died in Philadelphia. The following January, Thomas bought the C.W. Fountain residence next to the Presbyterian Church on Main Street (now the Bedle Funeral Home, 212 Main). Charlotte Hopkins, in a piece written for the Matawan Historical Society’s newsletter in 1979, stated that at the residence, the three Antisell sons were taught the piano trade, while the five daughters learned to play the instrument and each reportedly had their own piano at the home – five, in all.

The 1900 census listed Thomas and children Alfred, Frank, Rose, Daisy and Dora at a residence on Broad Street. Son Thomas, Jr had married Ida Smith in 1893 – she died in 1895 at 16 years of age, and he died of tuberculosis two year later and is buried at Rose Hill Cemetery.

The piano factory went into receivership in 1893, but Thomas apparently still had financial interest in the factory and adjacent foundry. Sometime prior to 1910, he moved to the Bronx and lived with his daughter Dora. He died in 1917 and is buried in the Rose Hill Cemetery. 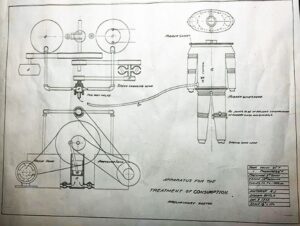 Thomas held several patents, including one for his unique piano plate and a gas-fired engine. In 1902, he designed an iron-lung prototype, most likely because of his son’s death from consumption (TB) five years earlier. (See image.) He sent the US Navy his plans for a midget submarine prior to WWI, which the Navy deemed impracticable at the time.

Son Alfred (1873-1961) continued in the engineering profession, operating the Alfred B Antisell Pump and Valve Company in New York, He held many patents in this area.

Third son Frank (1875-1943) was in the copper business in Perth Amboy and held numerous metallurgical patents in the field. He married Matawan resident Antoinette Schock in 1905 and they had two children, Katharine, who died at six years of age in 1916, and son Thomas, born in 1917. Antoinette died in 1928, and Frank subsequently married Eunice Slawter around 1930. They had three children – Elizabeth, Sarah and Frank, Jr.