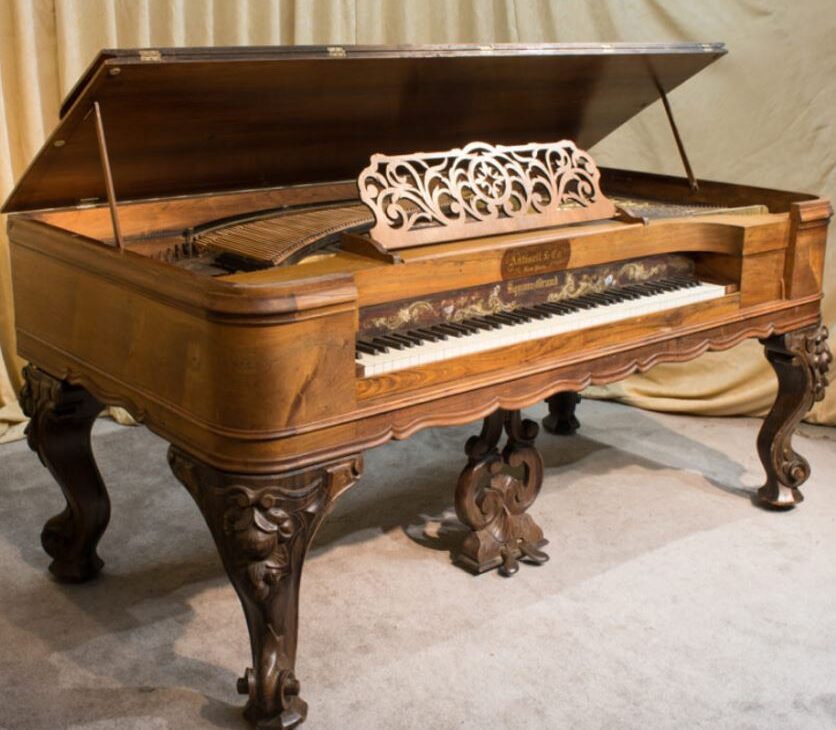 In early January of 1887, prominent Matawan businessman Edward I. Brown (1846-1913) organized the Matawan Improvement Company, a joint stock venture incorporated to bring industry to the town. He served as President, supported by Vice President D. G. Ryer, Secretary C.A. Geran and Treasurer C. H. Wardell. On the board of directors with him were the three other officers along with I. Cartan, William Spader, and H. H. Longstreet. Their initial goal was to purchase land and construct a building which would be occupied by the Window Shade Company of New York, reportedly the largest concern of its kind in the country.

Later that month the company bought tracts of land from Aaron Longstreet, John J. Beers and Margaret Bray. An 1889 map showed the location, with contactor Lewis Brown of Little Silver awarded the contract for the building at a cost of $8,860. Construction of the factory started in early February 1887. 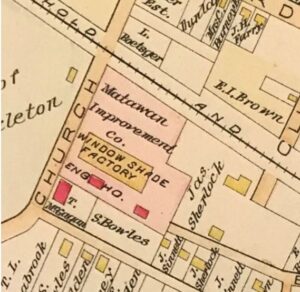 In August of 1887, the Matawan Improvement Company leased the building to the Standard Window Shade Company for ten years.

Although an 1889 map showed the Window Shade factory at that location, it wasn’t there long. It appeared to be in financial difficulty in February of 1888, and a May 12, 1888 article in the Matawan Journal indicated the goods at the factory were sold at a public sale earlier that month. The building then apparently was vacant for over a year.

In December of 1888, The Matawan Improvement Company met with Thomas L. Antisell of Philadelphia and discussed the sale of the factory. Antisell had been involved in the manufacturing of pianos in California since 1865. Immigrating to the United States from Ireland in the early 1860s, he married prominent Philadelphian Sarah Conly around 1867 in that city.

In April 1890, the Matawan Improvement Company sold the lot to Antisell for $5000. The following month, Antisell contracted with Lewis Brown to build a foundry on the property adjacent to the factory, and the company started producing pianos in September of that year.

In the May 1890 issue of the Music Trade Review, that publication lists a detailed account of the factory and the manufacturing process. (Click on image for article.)

The September 13, 1890 issue of the Matawan Journal reported that the Antisell Piano Company, soon opening in Matawan, had won first prize in the Piano Category at the World’s Fair in Australia. It cited the fact that it had taken six months to install the proper machinery, and that skilled workers were being brought in for the assembly of pianos. Previously being the leading West Coast manufacturer of the instruments, the new factory on the Eastern Seaboard was believed to be able to compete with established manufacturers in the area, Chickering, Weber, Hazleton, Sohmer, Harding and Steinway.

In the July 6, 1890 edition of the San Francisco Examiner, it was stated that the company had produced 25,000 pianos in California before moving to Matawan. The highlight of the company’s pianos was the patented steel wrest plank tuning device, which kept the instruments in tune longer. The company won many awards for its products, including the highest award of merit at the World’s Industrial and Cotton Centennial Exposition in New Orleans in 1885. The pianos were, according to the article, the “model of perfection” and were endorsed by the world’s most renowned musicians.

In anticipation of the plant being in operation, Matawan laid sidewalks and curbing on Church Street between Broad Street and the factory.

In late 1893, accidents were reported at the factory. While using a steam saw, George Eastmond cut off the tips of his fingers, as did the owner’s son, Thomas Antisell, Jr.

In the 1893 annual meeting of the company, second son Alfred was named President, eldest son Thomas, Jr, Secretary and father Thomas Treasurer. On the board beside the three family members were T.G. Crumley and C. H. Cooper.

The company started experiencing financial difficulties in the summer of 1893 and went into receivership that June. The factory was sold to Thomas, Jr in December of 1894 for $1800. He died three years later at the age of 26.

Apparently, Thomas, Sr maintained ownership of the factory until 1901, when he refurbished it and leased the foundry part to the Matawan Steel and Iron Company. The new company continued to make piano plates.

Although only in business for around three years, Antisell pianos were of high grade, considerably better quality than the pianos produced by the 2nd factory of that type. The Wason Piano Company which occupied the Flaked Rice plant on Main Street in 1913. Antisell’s demise was caused by stiff competition from established East Coast manufacturers. Wason only lasted for three years, too, having lost their factory to a fire in 1916.

Antisell pianos are relatively rare and command prices in the tens of thousands of dollars. While only occupying a brief span on Matawan’s business timeline, it was the first heavy industry involving forges and manufacturing in our city. Its still-standing factory on Broad Street would subsequently house A.P. Munning, Co. which later became the Hanson-Van Winkle-Munning Manufacturing Company. 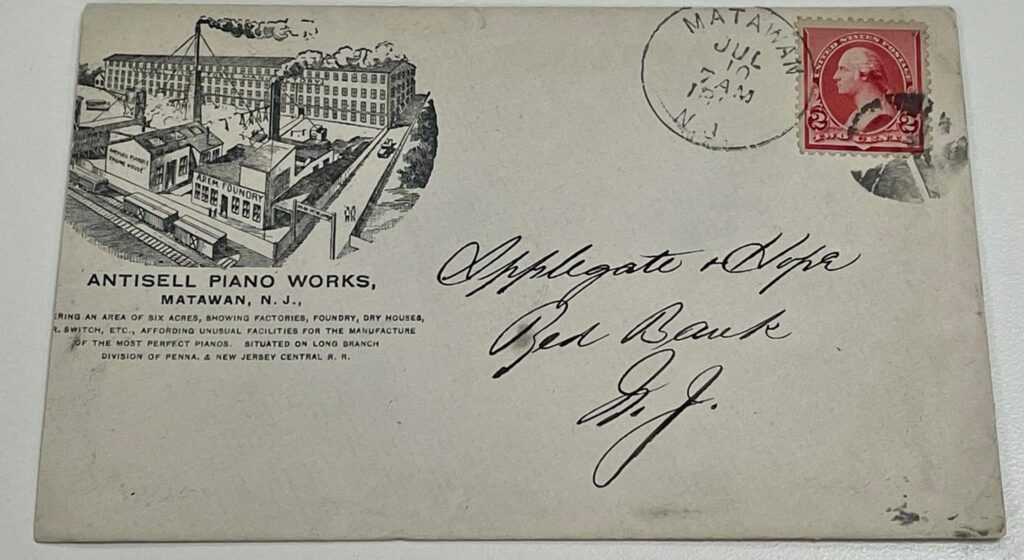 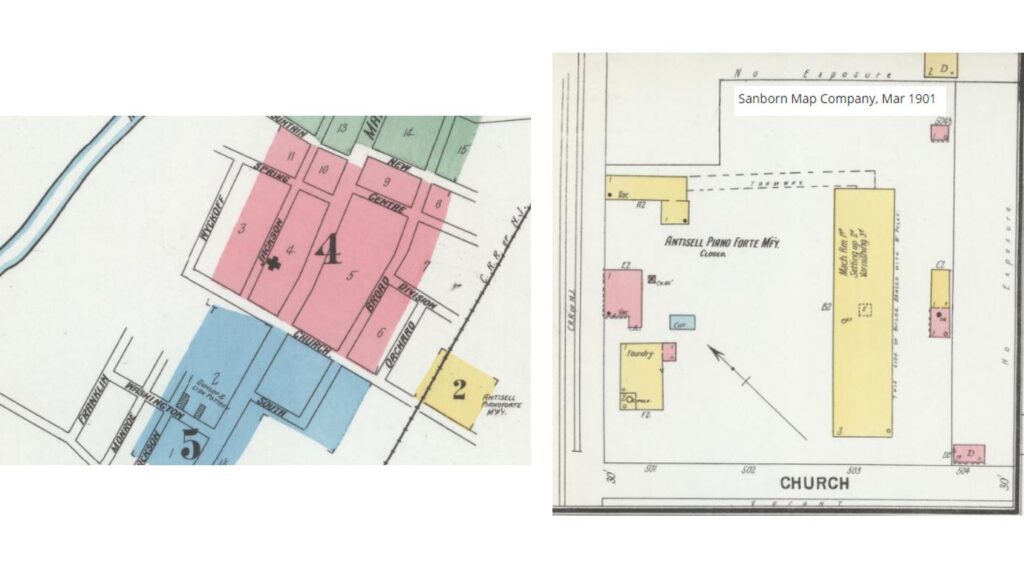