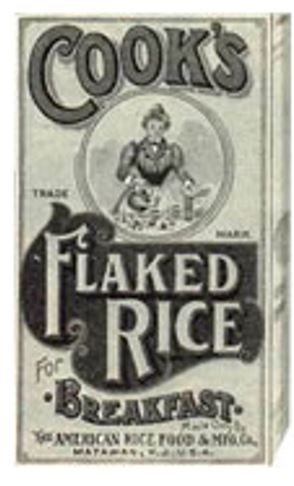 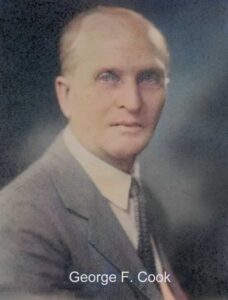 George Franklin Cook (1858-1947) built the American Rice Food plant in Matawan in 1897 to manufacture Cook’s Flaked Rice, a product he invented to help with his dyspepsia, a digestive disorder. (see Matawan Business entry) He moved his wife and five sons to Matawan in November 1896, taking up occupancy of Luther Boyce’s property on Broad Street. The couple’s six son, Robert, was born in Matawan in 1900.  After Cook sold his interest in the firm to Henry Longstreet in August of 1901, he relocated to Brooklyn, then moved to Miami in 1904, where he became an extremely prominent citizen.

A biography of Cook appeared in the Miami and Dade County, Florida publication by E.V. Blackman, Rainboth in 1921 and is presented, below:

“GEORGE FRANKLIN COOK, born in Thunder Bay, Canada, May 8, 1960 (note: birth year may be 1858 or 1859, based on census records), died in Miami, Florida in 1947, he was the son of Robert Cook, born in England, and Anna Widdifield Cook, born in Canada At age 18 he worked one year for the Canadian-Pacific Railroad and then on the construction through the Bad Lands of the Dakotas of the Northern Pacific Railroad. In Minnesota and North Dakota, he worked four years for Pillsbury & Hurlburt Milling Co. building grain elevators.

He moved to Brainard and then to Wadena, Minnesota, where he worked in general contracting until 1888 when he moved with his family to Toronto, Canada where he worked in real estate for four years. Sometime after mid-1881 he made an unsuccessful attempt at homesteading.

After leaving Toronto the family moved to New York City where in Matawan, New Jersey, he manufactured and marketed a breakfast food, “Cook’s Flaked Rice.” His son, Charles, sold his patent for puffed rice to Kellogg’s cereals. In 1904 the family moved to Miami, Florida, where he was awarded a contract to construct jetties for the protection of the lighthouse and seawall at Cape Florida.

He became an agent for the New York to Miami Brenner line of freight schooners for which he built the first independent dock on the Miami River. He later became an agent for Nassau Schooner Line bringing all Bahama trade to Miami. He organized the Key West-Miami Transportation Line operating schooners between Miami and Key West connecting with the Mallory Line to bring freight to Miami.

In 1909 he organized the Cook Steamship Company, bought the steamship Magic City and started carrying freight from Jacksonville to Miami. He met strong opposition (sometimes armed conflict) as an independent carrier which culminated in the ramming and sinking of the Magic City February 16, 1910 in the St. John River. He then became vice president of Merchants and Planters Transportation Company and bought the steamer Fanny Hart to take over the business of the Cook Steamship Company. Florida Governor Broward was president of the company.

In 1911 he and a partner joined in an up-scale residential real estate development in Miami. In 1913-1914 his general contracting company constructed the Collins canal and bridge on Miami Beach. In 1917 he helped in the organization of the Chevelier Corporation, serving as Secretary-Treasurer. As part of the building of the Tamiami Trail this corporation owned two hundred thousand acres of Everglades land.

Until the end of his life he continued his activity in real estate.”

A Descendant Chart for George Cook can be viewed here:  Descendants of George Franklin Cook