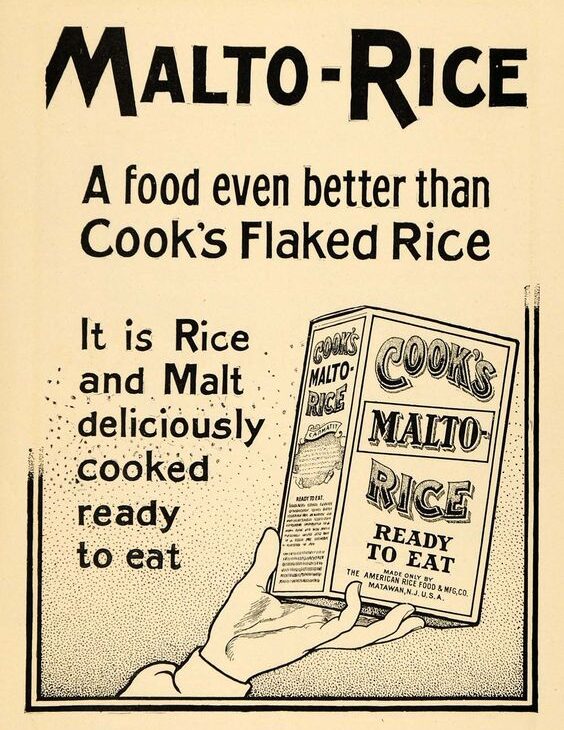 In April of 1896, The American Rice Food & Manufacturing Company of New York bought the old mill property in Freneau and planned to commence production of “grain food.” George F. Cook, the inventor of the process of flaking rice had been afflicted with dyspepsia, a digestive disorder, his entire life. No foods seemed to offer relief, and after extensive experimentation he stumbled upon a process of preparing rice which while keeping its nutritional value, was easy to digest. When numerous friends decided that they, too, liked the product, he decided to go into business and with a few hundred dollars purchased the mill, which was operated by just a few employees with Cook doing a good amount of the labor himself. The product would eventually be marketed as “Cook’s Flaked Rice.”

Six months later it moved its manufacturing process to the recently vacated J. L. Rue pottery plant off Main Street near the railroad tracks (behind what is now Aby’s Mexican Restaurant). 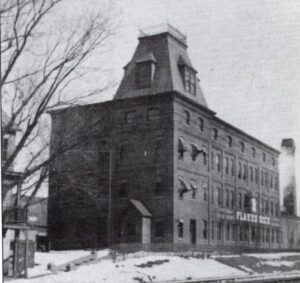 It re-incorporated with the stockholders being H.H. Longstreet, A.H. Morton, George F. Cook and DeWitt C. Winterton of Keyport. Shareholder Henry Longstreet purchased this property for $10,750 in September after the pottery company went into receivership. The initial effort at the old mill site was successful and the new location would enable them to increase production and be more profitable.

By the following June, the demand for “flaked rice” was so great that a decision was made to build a plant in Matawan devoted to its production. Earlier in January 1897, shareholder Longstreet had purchased the Matawan House and the Woodbine Hotel at the train station and since the site for the new plant was adjacent to the Woodbine, this property most likely came from this purchase. The structure to be built would be four stories, 42’ x 100’, with a boiler and engine room at 25’ x 59’. Contracts were listed as carpenter work to John Parker & Son of Newark for $5,112 and masonry to Sweeny, Cranmer & Mulock of Atlantic City ($4000).

In November of 1896, Cook, his wife and five sons moved into Luther Bryce’s home on Broad Street and resided there until they removed to Brooklyn in October of 1901.

In a March 7, 1899 article in the New York Tribune, a step-by-step process of the operation was outlined, with select rice from the Carolinas being ship directly to the Matawan plant adjacent to the railroad tracks in the town. The preparation process was also presented in detail, with the claim that one pound of cooked rice contained 21% more nourishment than a pound of beef and a pound of potatoes combined. Cookbooks were reportedly given away with each package of the product.

In March of 1897, 5000 pounds of rice shipped to the company was contaminated with kerosene previously held in the car in which it was shipped. The company refused delivery and filed a claim with the New Jersey Central Railroad which transported the product. In January of 1898, burglars used dynamite to blow open the company’s safe, after stealing tools from the Tilton & Cherry carriage factory nearby. They made off with around $600 in small change and checks. 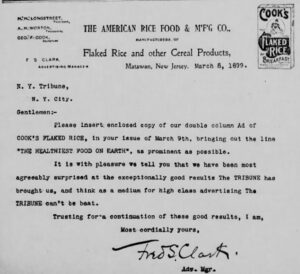 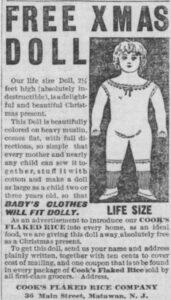 In December of 1899, the company held a promotion advertised in newspapers across the region offering a free “life size” doll that “nearly any child could sew together.” The doll could be had for 10 cents postage and a coupon from a flaked rice package. These dolls are now relatively rare and collectible.

In April of 1900, George Cook’s separate Cook’s Flaked Rice Company of New York contracted with American Rice in Matawan wherein American would provide the New York firm with 100,000 cases of their flaked rice a year for five years, with the option of extending it to 200,000 cases after April of 1905.

In August of 1901, Cook sold his interest in the Matawan Company to Henry Longstreet for $5000. Longstreet and shareholder Morton subsequently reincorporated as a joint stock enterprise.

By 1907, the factory was working double shifts to meet the demand. Railroad cars of raw rice would be unloaded via conveyor belt to the fourth floor of the factory where it was cleaned, purified and flaked via steam. The ovens processing the rice were three stories high and the rice world circulate through the ovens on belts for two- and one-half hours during the process.

On December 26, 1912, the Matawan Journal reported that Henry Longstreet filed paperwork to voluntarily dissolve the company. Articles in the spring reported that the factory had been closed for years, with the single remaining employee, Matawan Borough Clerk William A. Rodgers, who had been with the company since 1896, leaving in early May. The certificate of dissolution was formally accepted by the New Jersey Secretary of State on December 21, 1912. 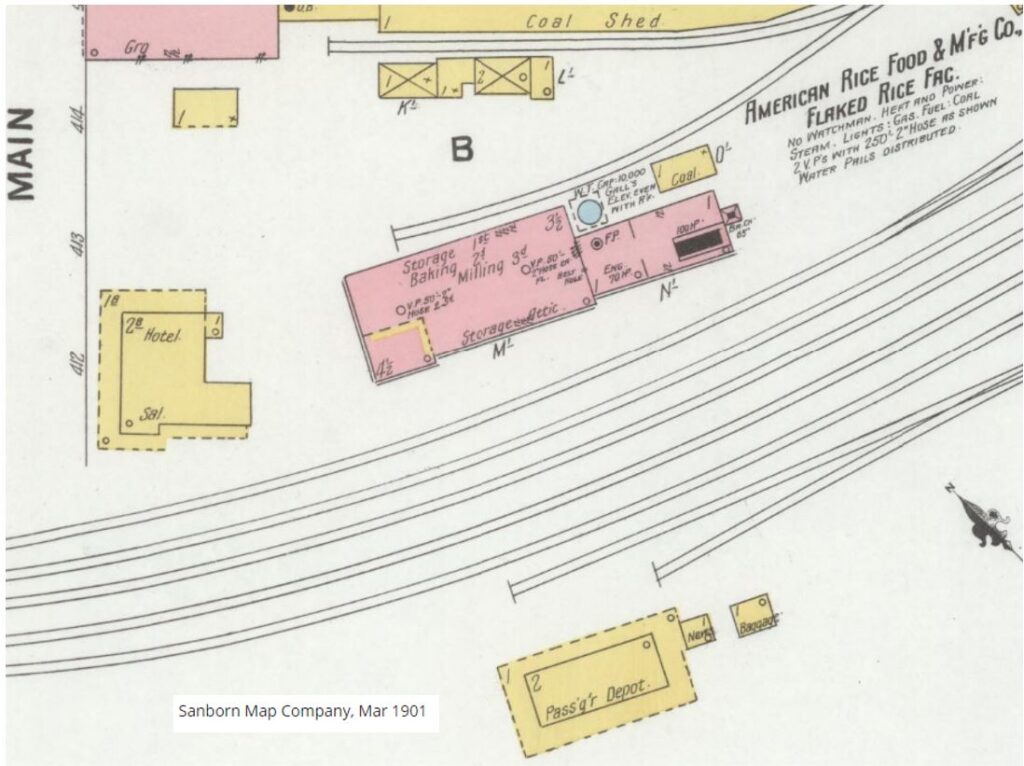