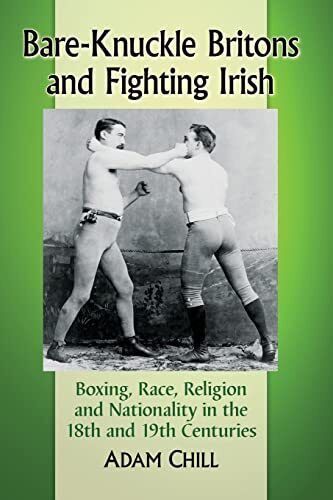 James Kelly was reportedly born in 1833 in Donegal County, Ireland. He leased the Matawan Tannery with William Casler in the early 1870s and operated it for some years (see separate writeup in the ‘Matawan Businesses’ section for this enterprise.) He also was said to own several farms in the area.

Kelly was a world-renowned bare-knuckle boxer in the mid-19th century. Information about his exploits appear in newspapers across the country, but the most thorough account located was written by Asbury Park Press staff writer Wes Moon on January 16, 1987. His account is synopsized as follows:

“Australian Jim Kelly”, fought a Jonathan “Jack” Smith at Fiery Creek, Victoria, Australia, in a bout that lasted six hours, fifteen minutes – supposedly 101 rounds – the longest bare-knuckle fight on record. He reportedly fought a boxer named “Hammy” a few months before, defeating him in the first round, which was the shortest bout at the time.

The fight with Smith, a 34-year-old former English soldier and Kelly, 24 and a former sailor, was quite the event and drew a huge crowd. Details were obtained by Mr. Moon from boxing columnist Rod Powell of the Adelaide, Australia, “The Advertiser” newspaper, who referred Moon to the publication Lords of the Ring, a history of Australian boxing written by Peter Corrie, published in 1980. The book describes the fight in detail.

Moon wrote that Kelly arrived in Australia aboard a ship owned by his English aunt. He supposedly had six fights in England and some in the US before going to Australia. It is unclear if this information came from Corrie’s book or from other sources.

Moon interviewed three of Kelly’s descendants for the article – Mildred Bennett, Joseph Miller and Margaret Bulgiari, now all deceased. All had only fragmentary oral histories to share – old scrapbooks and other memorabilia were lost in a fire years before. Kelly was supposedly wealthy when he first came to Matawan.

According to the New Jersey marriage index, Kelly married Matawan resident Mary Kaney (1844-1926) on January 1, 1865 in Matawan – the 1865 New Jersey census enumerated June 1 of that year has the couple – plus a child John – residing in Matawan. It is noted that subsequent census and other records have John born in 1861, four years before the record of the Kelly’s marriage. The marriage date on the index may be wrong, but this is unclear.

The 1870 census lists them in town with their first three children, John, Edward (born 1866) and Jane (1869). James profession is listed as “farmer”. In 1873, James was arrested for assaulting Matawan constable John Disbrow. He subsequently was found not guilty. In 1877, James along with George Woods and John Dugan of Matawan were indicted for resisting an officer and assault and battery.

The 1880 Matawan census has the family, with the addition of children Thomas (1875) and Maggie (1879) in Matawan. James’ occupation is listed as ‘farmer’. They were also in Matawan in 1885, although son John was not enumerated with them. Daughter Mary (182) was a new arrival.

In 1892, James was arrested in Keyport for assaulting J. Don Conover.

James and John are together in 1895 in Matawan, per the census that year.

James and Mary appear to have separated sometime after 1885 – James is living by himself in 1900 and Mary with son Thomas and daughter Margaret on Main Street.

James died June 27, 1914, at the home of his son Thomas. His obituary indicated that he had recently fallen on hard times and lost all his property except for a small parcel. It stated he had been in Matawan for over 40 years, originally owning two farms near Matawan and one at Colts Neck, along with his interest in the tannery. His funeral was at St. Joseph’s Catholic Church in Keyport, and I believe he is buried at the cemetery there.

The 1910 census had her daughter Mary living with her and in 1920, son Edward, who was separated from his wife. She died Jun 25, 1926 and she is buried in the St. Joseph’s Cemetery in Keyport.

On November 3, 1921, and advertisement appeared in the Australian newspaper “The Age”, wherein William A. Miller of Old Bridge, NBJ, had written the police for information on the relatives of James, who had died seven years earlier. The article stated he left an estate of $10,000,000. The article advised that this James was an uncle of “Australian Jim Kelly”, the prizefighter. No additional information could be found regarding this. Miller was James’ grandson, the son of James’ daughter Margaret.

John (1861-1887) – John’s obituary stated that he died at the home of his father in Matawan at the age of 35. He had been “partly demented” for many years and his death was due to “exhaustion.” He is buried in the St. Joseph Cemetery.

Edward Kelly (1966-?) – Edward married Elizabeth Melville of Matawan in November of 1891. They had one daughter, Helen Kelly Clemensen (1893-1976). Edward apparently had a problem with alcohol and was arrested on numerous occasions for riotous conduct in the mid to late 1880s. He would have been known as a “hellraiser” by the local authorities. The Journal printed a humorous article regarding some purchases he made for his wife to be days before his marriage. Having bought the items in New York, he stopped at several saloons and lost the items at one. He then repurchased them and subsequently forgot them on the train when he got off in Matawan. In 1897, he passed out intoxicated on the railroad tracks and was struck by a train between Freehold and Jersey City. He survived, but the Journal made the sarcastic comment that his family was supported by his wife, not him. The family was still together in 1910, but his wife and daughter apparently left him and moved to California sometime before 1920. His mother’s obituary has him residing in Matawan in 1926, but no info could be located subsequent to this.

Jane Kelly Parsell (1869-?) – the 1885 census lists Jane at around 15 years old with her parents, then she disappears. Two grandchildren, Margaret Parsell (1885-1960) and James Parsell (1887-1969) were residing with her mother Mary in 1900. Records indicated the parents of both were Charles Parsell and Jane Kelly, but no further information regarding these two could be located.