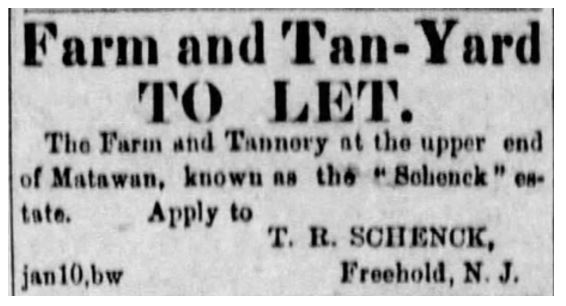 Early businesses in communities focused on residents’ immediate needs – butcher shops, sawmills, dry goods stores, blacksmith shops, etc. Some trades catered to a larger surrounding area, and one of the earliest established in Matawan was a tannery, or “tan yard” as they were referred to. 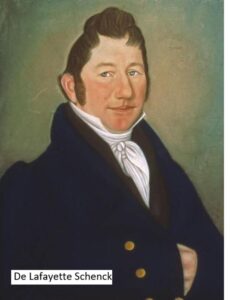 In 1815 De Lafayette Schenck (1781-1862) established one in what is now the Edgemere Heights neighborhood in Matawan, on the corner of Main Street and Route 34. The Schenck family had owned the property for decades – Schenck Avenue is its entrance from Main Street, and the large white residence on the corner of those roads, now 298 Main, was an original Schenck residence dating from the mid-1700s. The Schenck’s original homestead was in Pleasant Valley, where De Lafayette was born. His father, John Gerritsen Schenck (1745-1834), was the militia leader who lead the retaliatory raid on New York City after the skirmish at Burrowes Mansion during the Revolutionary War.

The Shields 1851 map shows the location of the tannery in Middletown Point.

In 1864, George W. Bloodgood (1821-1896) took over the business. The 1850 and 1860 Matawan census records listed his occupation as a tanner, and I suspect he worked for Schenck and took over the business when Schenck died. The Monmouth Inquirer on January 3, 1867 had a review of Matawan, in which it stated that “the beautiful and thriving village” was prospering, and “is now lit up at night by large lamps from George W. Bloodgood’s extensive tan works to the hotel of John V. Cuttrell, making nearly a mile of thus improved.” They also noted sidewalks for the same distance being graded and paved.

The 1870 census has Bloodgood employed as a hotel keeper in Burlington, NJ. He died in Philadelphia in December 1896. 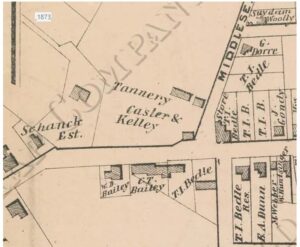 Sometime after Bloodgood left, William Casler and James Kelly took over the tannery, as noted on this 1873 map.  An article in the Matawan Journal dated October 28, 1927 entitled “Main Street in 1873” identifies the location of the tannery – along Main Street and what is now Route 34 – and identified it as “several good size buildings in which hides, bark and other materials used in tanning he leather were stored. There were vats sunk into the earth in which the hides were placed and treated to remove the hair and wool.” It is noted that about ten years ago, a neighbor of mine who resides at 914 Route 34, near the two tannery outbuildings on the 1873 map, showed me a growing “sinkhole” behind her home on Center Alley, which runs between Route 34 and Schenck Avenue. A close examination showed that it was brick lined. At the time, I believed it to be a cistern. Now it seems that it was a tanning vat and it has since been filled in.

James Kelly (died 1914) was an interesting individual. Known as “Australian Kelly,” who, in 1848, won a prize fight characterized as the “Championship of the World.” The fight reportedly went 101 rounds and lasted six- and one-half hours. 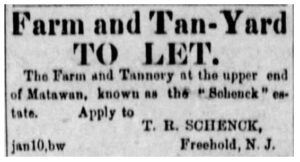 Tunis R. Schenck (1856-1919), the grand nephew of De Lafayette and owner of the property that would become Edgemere Heights, attempted to rent the property in 1880, but I can find no evidence it was used as a tannery again.

In 1903, the Midway Hose Fire Company built a station on the corner property of Main and Middlesex (now Rt 34) streets, the site of the former tannery office. This building was torn down in 1920 and the present-day structure, 922 Main Street, was built in 1921.