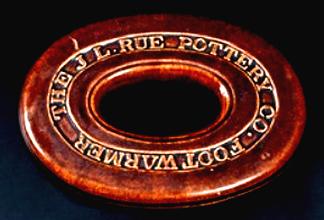 Prominent Matawan figure Henry Arrowsmith (1841-1921) married Mary Rue’s daughter, Mary Slack Fish (1853-1934) in December of 1876. In the spring of 1881, Arrowsmith, along with John, Ten Eyck and John’s son Isaac Rue formed a partnership and founded the J L Rue Pottery Company (see separate writeup in the ‘Matawan Business‘ section). The Rue’s had been involved in the making of pottery since around 1860 when they took over the Swan Hill Pottery establishment in South Amboy. While other enterprises producing stoneware and pottery had been operating in Middletown Point/Matawan since the 1830s, none were of the magnitude of J.L. Rue Pottery Company.

In 1883, Ten Eyck Rue died, and in early 1884 Henry Arrowsmith sold his interest to John L and Isaac Rue. John died in 1889, and Isaac continued the company until it went into receivership in 1895.

Son Isaac resided in Matawan until his death in 1929. He served as Borough Engineer in Matawan and was responsible for setting up the Matawan Water Works in 1902 and ran the borough’s sewer system to the time of his death. He served as a town councilman and acted as “overseer of the poor” in Matawan. He appeared to be a popular and well-loved figure in the community.