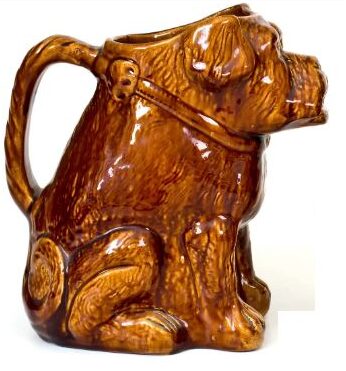 There have been a series of pottery and tile manufacturers behind what is now Aby’s Mexican Restaurant at 32 Main Street. The initial one was the J. L. Rue Pottery Company.

In the Keyport Weekly May 7, 1881 edition, under the heading “The Pottery Works at Matawan”, it was reported that a parcel of land from “The Dayton Estate” was purchased for the company in February of that year. An 1873 Matawan map has an “H. Dayton” – most likely Huldah Conover Dayton (1828-1915) – residing on the parcel between High and Water Streets. 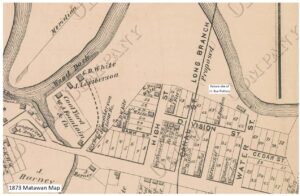 The estate was part of the property belonging to prominent Matawan physician Dr. Alfred Bailey Dayton (1812-1870).

Starting with a capital of $24,000, the officers were listed as John L. Rue, his son Isaac Rue, his brother TenEyck Rue (full name Abraham TenEyck Rue) and Henry Arrowsmith of Matawan. Henry was married to Mary Fish, J.L. Rue’s niece. The Rue family had been involved in pottery in South Amboy for around twenty years.

The pottery firm’s buildings were to be made of brick, with VanDeventer brickyard of Matawan supplying this material – a frontage on the adjacent railroad tracks would be 117’ long and faced with Croton bricks. The building itself would be 100’ deep, with two kilns extending 20’ external diameter, and a 17’ x 24’ engine room was to be added to one of the larger buildings.

The company would employ 20 to 25 hands – men and boys – some of whom would be skilled artisans from abroad. The ceramics to be produced would be Rockingham and yellowware, with the clay being shipped in from South Amboy and Woodbridge. 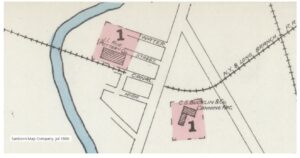 The plant was expected to be up and running by July 1st. Frederick Massey was the general contractor with John Hulsart and Theodore Lambertson doing the masonry. Lumber was furnished by the Matawan firm Cartan & Company, with C. A. Geran providing lime and cement.

In 1883, TenEyck Rue died, and in early 1884 Henry Arrowsmith sold his interest to John L. and Isaac Rue. 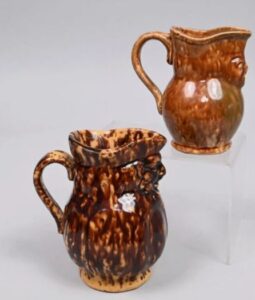 The Matawan Journal highlighted local industries in town in their May 17, 1884 edition, and J. L. Rue Pottery was noted. Father J.L Rue acted as salesman of the product, while son Isaac was the plant superintendent. The factory consisted of two large buildings with kilns between them. The article then continued in detail regarding the production of the wares and operation of the plant. 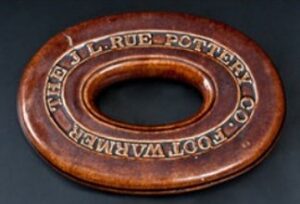 The product line was expanding, with the introduction of an imitation majolica ware, along with ornamental flowerpots, highly figured with acorns, oak leaves, etc. The plant was employing 36 individuals at the time – many heads of families – and it was said the business added 100 individuals to the population on Matawan.

Injuries at the plant were often reported in the local papers. In February of 1885, Richard Lowe was struck in the head and severely cut when he missed an earthen cuspidor that was being thrown to him.  The next month Obadiah VanPelt climbed in a massive tub in the basement of the factory that mixed clay. Someone inadvertently started the machinery, and if he hadn’t had a crowbar with him to jam the machinery, Mr. VanPelt would have suffered a gruesome fate.

In December of 1889, J. L Rue died, and the business passed to his son. Two years later Isaac started producing enameled brick. After two years of experimenting, eight prominent New York brick merchants and businessmen were invited to the factory for a test production of 200 pieces. When the kiln was opened, only two were deemed imperfect, and the experiment was deemed a great success – all participants later went to the Aberdeen Inn to celebrate.

In May of 1895, the company went into receivership. At a lightly attended auction, the real estate, machinery and unsold bricks went for “a song”. It was reported that the successful bidders – Henry Longstreet and Alfred Dayton’s son Rennselaer, who was said to be bidding for Mr. Longstreet’s interests – were known to be purchasing it for a future pottery business, and that kept the bidding low – no one supposedly wanted to run it up. The receiver settled the outstanding debts of the company in September 1896. Four months later, the new Matawan Terra Cotta Company leased the facilities. 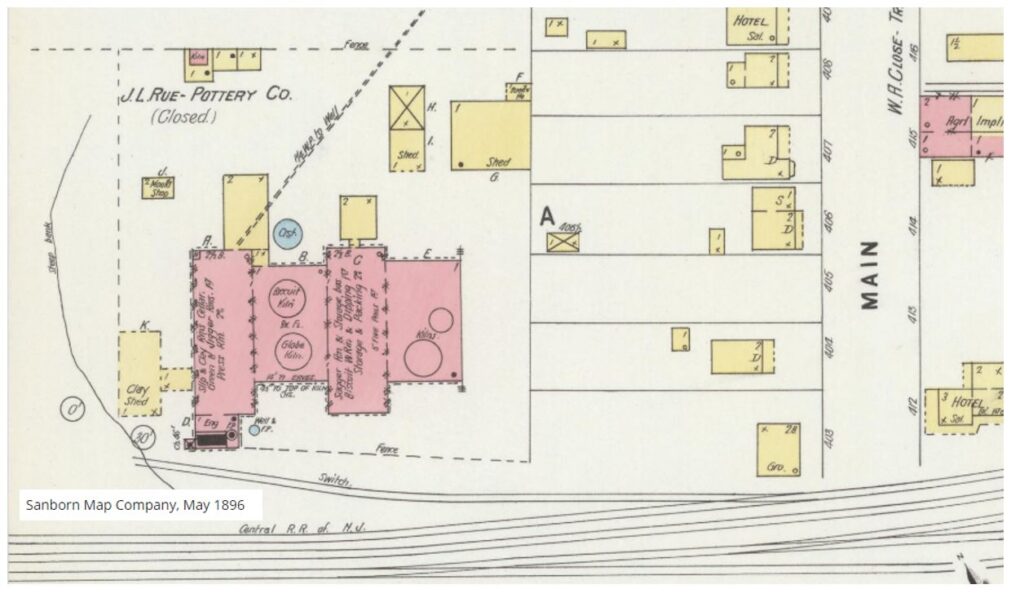