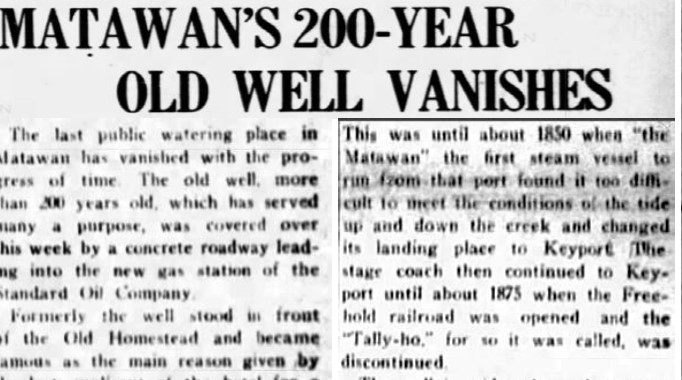 All the wells in Matawan didn’t end well.

While researching information for the Surname Project, Matawan Historical Society genealogist Mark Chidichimo came across this Matawan Journal article (The Old Well) on the demise of Matawan’s last public watering place in 1927.  Once situated in front of the Old Homestead Hotel, the well was “the only place in town where horses could be watered.”

The Hotel was located at site of the now defunct liquor store across the street from Memorial Park at Broad and Main Street.  In its heyday, as evidenced by the 1894 ad below, it was a hub of social activity and accommodated guests arriving by steamboat on Matawan Creek, or by horse or stagecoach.  The bar was well stocked with beverages “suitable for Medicinal or Family use.”  Conveniently, a pipeline from the well ran directly to the back of the bar.

The Hotel was built in the mid-18th century and was the residence of Benjamin Ledyard and his wife Catherine Forman.  It was one of several homes built along Matawan Creek during the same period. These included the Old Hospital (Forman House), the Ness House (destroyed by fire in 1896), and the Burrowes Mansion.   At that time, Middletown Point (Matawan) was the major shipping port of Monmouth County, being two miles closer to inland farms than Keyport.  As early as the 18th century, Matawan Creek was more like a deep river than a creek and was navigable all the way to area of the current Route 516.  By the 1850s, as the creek became shallower, the area directly behind the Old Homestead became the head of navigation. 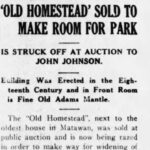 This article (Old Homestead Sold) describes the last, sad days of the Old Homestead in 1925.  The building was torn down that year to accommodate a widened concrete road and park.  Interestingly, the Hotel’s Adams-style mantelpiece mentioned in the article was saved and moved to the front parlor of the nearby Burrowes Mansion.  This was noted by Mary Lou Koegler (Diecker) in her book on the Mansion (p. 78).

In December 1926, construction of the Standard Oil gas station and the Mount-Barrett Ford dealership at the site of the Old Homestead was begun.  The old well was covered over during this project.  That dealership building currently houses the abandoned liquor store and several other businesses.

It’s easy to miss the Old Homestead, even though it’s been gone for almost 100 years.  With its free-flowing water and beverages, “oysters and lunch at all hours,” and free Saturday evening chowders, it must have been one of the happiest places to be in old Matawan.