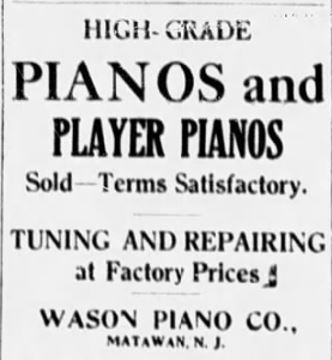 Twenty years after the closing of the Antisell Piano Company in our borough, George Eugene Wason (1874-1950) and family moved to Matawan around 1913 to try his luck in the industry.

The September 4, 1913 edition of the Matawan Journal headlined “New Industry for Matawan,” advising that articles of incorporation for the Wason Piano Company were being prepared. Management of the company reportedly was from New York and were experienced in the industry. The company would start with $100,000 in capital, split 50/50 between common and preferred stock. A large draw of the company was the fact that the nearby Matawan Steel and Iron Company, which had been associated with the Antisell firm, produced piano plates. 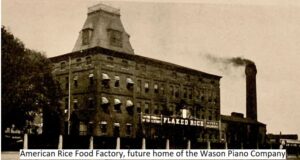 The factory would be housed in the former American Rice Food Factory across from the Matawan train station and around 40 skilled hands would receive a weekly payroll of over $800, which was said to greatly benefit the community. Expected output was 30 pianos a week, with an eventual goal of 2000 per year. The Journal complained at length, however, about a lack of housing in town for the new workforce.

Five weeks after starting up, the company rolled out its first piano on October 30, 1913 and had shipped 70 by November 20. Wason was said to employ 44 hands, 15 of whom were heads of family and brought their wives and children with them. Lack of housing was still cited (the company advertised in the paper looking for room and board for its incoming employees), and some had to live in Keyport.

Wason produced both upright and player pianos, priced between $300 and $600.

Besides Charles Wason, who handled the office work of the company, Henry Sommer of New York was a principal and oversaw the manufacturing process. Its President was Matawan resident Henry H. Longstreet (1857-1938). Other employees were Herbert Cline, bookkeeper, P.D. Snavely, head of retail sales and Nathan Weed, salesman. 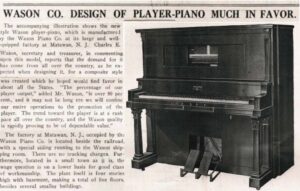 The company was listed in the October 1914 edition of the Music Trade Review. (Click on article to view.)

In April of 1915, the firm sold three pianos to the Keansburg Steamboat Company, one for each of their three vessels. The new auditorium in Keansburg also purchased a pianola. 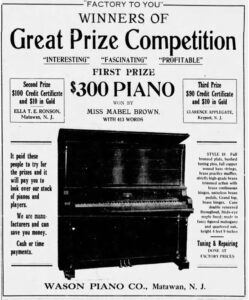 In the summer of 1915, the company held a “Great Prize Competition” which apparently judged writing ability. Prizes were a piano and gold certificates. 30-year-old J. Mabel Brown, who would eventually be the editor of the Matawan Journal and Keyport Weekly, won the top prize.

In February of 1916, Wason rented out the top two floors of its building to the Synthetical Chemical Company of New York. Two months later, Wason declared bankruptcy, with assets of $70,000 and liabilities of $34,000. The assets consisted of a $22,000 insurance policy, the factory valued at $20,000, merchandise of $7400 and machinery worth $2,600. Charles Wason was listed as the largest creditor with a claim of $5600. Bankruptcy administrators were named on May 25, 1916.

Approximately three weeks later, a fire broke out on the first floor of the factory occupied by Wason. It was a reportedly horrific conflagration, with the local fire departments giving up on attempting to save the factory because of the heat and explosions – they concentrated on saving the nearby Matawan Train Station and Kennedy Hotel. Matawan and Keyport fire departments were involved in fighting the blaze. When the fire was out, large portions of the building collapsed. Both Wason and the Synthetical Chemical Company lost everything, and the plant was not rebuilt.

In January of 1918, the Midway Fire Department purchased a Wason Piano from Matawan Borough. The piano had been given to the town to settle an earlier outstanding water bill. In 1979, that piano was donated to the Matawan Historical Society, and now sits in the Tea Room of the Burrowes Mansion.

Prior to moving pictures and radio, pianos were a major source of entertainment for households in the country. Neither Antisell nor Wason managed to stay in business for over three years, though. Stiff competition from numerous other piano companies in the vicinity, notably Steinway, were instrumental in their short period of operation in Matawan. Both were, however, the first heavy industry in our town and were important to the community. 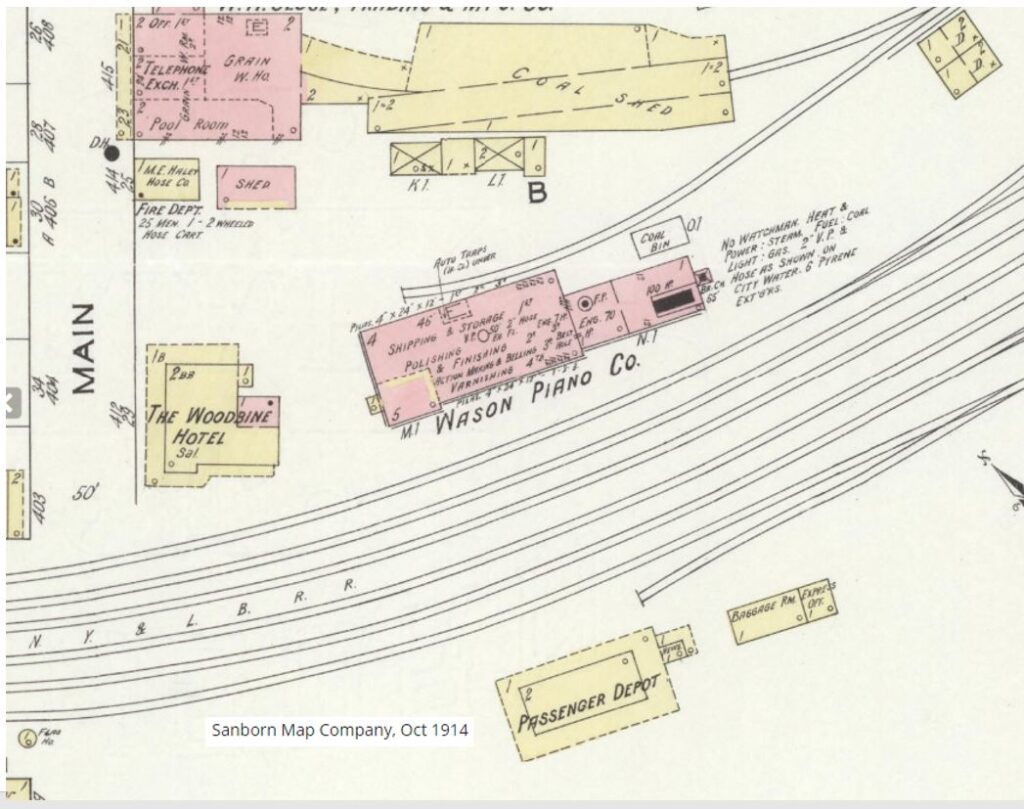